The song is a continuation of the group's tradition of coming out with songs for the Passover holiday. 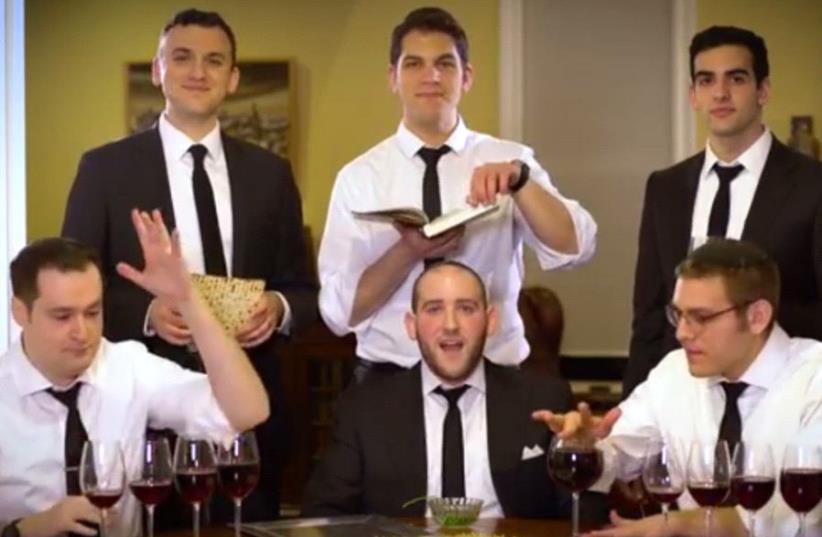 Still from the Maccabeats 'Mah Nishtanah'
(photo credit: screenshot)
Advertisement
Jewish a capella group 'The Maccabeats' are back with a new song for the Passover holiday.
Titled "Nirtzah: The Seder Finale," the song is unlike the group's usual work, which tend to focus on one specific song. Rather, this latest track is a medley of songs featured in the Nirtzah portion of the Haggadah, which is the last part of the Seder.
The song appears to be recorded remotely, with the music video showing the singers and their families in individual panels interspersed with clips of their families.
The medley kicks off with "Hasal sidur Pesach," moving into the classic "L'shana haba b'Yerushalayim" (Next Year in Jerusalem). From there, it transitions fast into "Ki Lo Na'eh" before going to Shlomo Carlebach's version of "Adir Hu." Then, it slides into "Echad Mi Yodea" before switching into its English version ("One is Hashem") as performed by Uncle Moishy and the Mitzvah Men before finishing with an energetic rendition of "Chad Gadya," the final song.
The song is a continuation of the group's tradition of coming out with songs for the Passover holiday.
Last year, the group recorded a short, minute-long a capella version of "Vehi Sheamda." In 2017, the group came out with a cover of "Ma Nishtana" (the Four Questions), another part of the Seder. There 2016 song was a Justin Bieber Passover mashup, and their 2015 song was simply called "Dayenu."
In 2013, they released "Les Misérables: A Passover Story," comparing the story of the Exodus with the events of the musical adapted from the Victor Hugo novel.
But 'The Maccabeats' aren't the only Jewish a capella group to have released a song for Passover. The group Six13 released their Passover-themed cover of the sea shanty "The Wellerman," which had experienced a resurgence of popularity thanks to the social media platform TikTok.