Health Scan: Diabetics who fast must get medical advice

With Tisha Be’Av around the corner, it should be noted that additional health dangers to diabetics include thrombosis and dehydration. 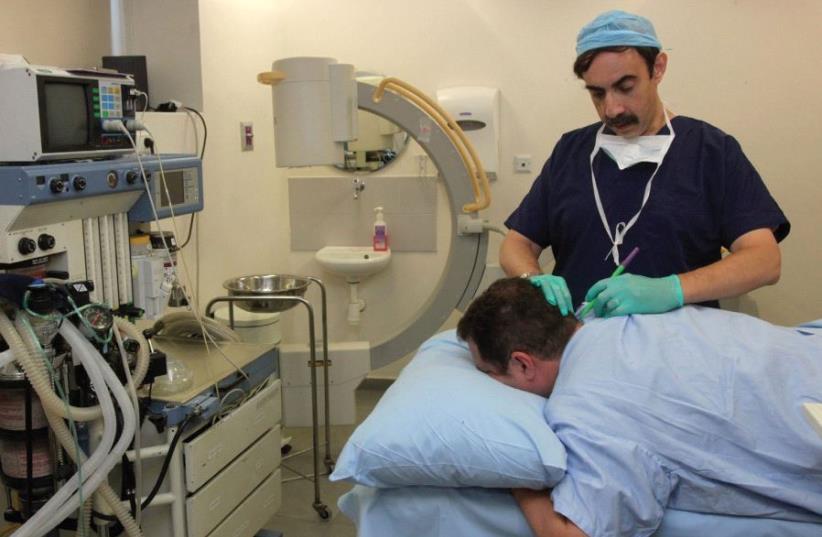 AN ISRAELI DOCTOR examines a patient in this illustrative photo.
(photo credit: MARC ISRAEL SELLEM/THE JERUSALEM POST)
Advertisement
People who have type 1 or type 2 diabetes and thus do not have to fast, but who nevertheless do fast, can cause themselves harm if they don’t consult with a medical expert. So says endocrinologist Dr. Zaina Adnan of the Zvulun clinic of Clalit Health Services in Kiryat Bialik near Haifa.During the month of Ramadan, healthy Muslim adults are bound by their religion to abstain from food, drink and tobacco every day from sunrise to sunset (many teens do so as well). They eat two large daily meals during the month – the Suhoor in the predawn hours and the Iftar after sunset. While diabetics are not required to fast, many do so anyway, writes Adnan in a recent article in the Israel Medical Association Journal.It is believed that the prevalence of diabetes is significantly higher (10.3%), for genetic and lifestyle reasons, in the Israeli Arab population than in the general population (8.4%). Thus, observance of Ramadan among them is problematic. Diabetics who take insulin and/or drugs may develop hypoglycemia (low blood sugar) when fasting or hyperglycemia (high blood sugar) when gorging on food. Overindulging may also cause weight gain, which is harmful to such patients.With Tisha Be’Av around the corner, it should be noted that additional health dangers to diabetics include thrombosis and dehydration. The elderly, those with weak kidneys and those with other chronic conditions listed in the article are at very high risk as a result of the fast, Adnan continues.She urges diabetics who fast to be evaluated by experienced physicians or diabetes nurses to determine whether they should be allowed to abstain from food and drink. If they can fast, they must get advice on what drugs, including injected insulin, to take and when.TEST TO FIND DISEASES FROM DYING CELLS Medical researchers have long yearned to develop a simple, highly accurate, non-invasive test that could detect a variety of diseases, but there is no single diagnostic test that fulfills this function.Hebrew University Prof. Yuval Dor and Dr. Ruth Shemer have received the university’s Kaye Innovation Award for finding a way to detect specific tissue damage from a blood sample.To solve this problem, they – together with Prof. Ben Glaser, head of the endocrinology department at Jerusalem’s Hadassah University Medical Center – developed a new blood test that looks for the remnants of dying cells cast off by specific tissue types throughout the body.When cells die, they release DNA fragments into the circulatory system. The DNA of each type of dying cell carries a unique chemical modification called methylation. By detecting the unique methylation signatures of DNA from the fragments of dying cells, they were able to detect multiple disease processes – including diabetes, cancer, traumatic injury and neurodegeneration – in a highly sensitive and specific manner.Dor and Shemer are researchers at the Institute for Medical Research-Israel Canada in the HU’s Faculty of Medicine. They envision a future in which the continued research and refinement of their new technology will lead to a universal, rapid, sensitive and quantitative blood test for tissue-specific cell death. This blood test could be used to assess multiple pathologic conditions simultaneously, equivalent to standard blood chemistry panels in use today.The Kaye prizes were established in 1994 by Isaac Kaye of England, a prominent industrialist in the pharmaceutical industry, to encourage HU faculty, staff and students to develop innovative methods and inventions with good commercial potential that benefit the university and society.POSTMENOPAUSAL HORMONE AND HEARING LOSS Hearing loss afflicts approximately a growing number of people, and the number is expected to increase as the population ages. Previous studies suggested that menopause may increase the risk for hearing loss, presumably due to the reduction in circulating estrogen levels, and that postmenopausal hormone therapy might slow hearing decline by “replacing” estrogen.To investigate the role of menopause and postmenopausal hormone therapy as risk factors for hearing loss, researchers at Brigham and Women’s Hospital examined the independent links between menopausal status, oral hormone therapy, and risk of hearing loss in 80,972 women in the Nurses’ Health Study II, who were followed from 1991 to 2013. The findings are published recently in the journal Menopause.During the study period, 23% of the participants developed hearing loss. Researchers found no significant overall association between menopausal status and risk of hearing loss, although higher risk was associated with older age at natural menopause. Use of postmenopausal hormone therapy was linked to a higher risk of hearing loss, and the risk tended to increase with longer duration of use.“Many factors contribute to acquired hearing loss, including age, genetics, noise, medical conditions, diet and lifestyle factors,” said Dr. Sharon Curhan, the lead author.“Our research focuses on identifying preventable contributors to hearing loss. Although the role of sex hormones in hearing is complex and incompletely understood, these findings suggest that women who undergo natural menopause at an older age may have a higher risk.”Hormone replacement therapy for a longer time is associated with higher risk. These findings suggest that hearing health may be a consideration for women when evaluating the risks and benefits of hormone therapy, Curhan said.
Sign up for the Health & Wellness newsletter >>