Donkey trampled to death in overcrowded animal shipment to Gaza

In a case of animal cruelty, the donkeys were loaded up onto the bed of a truck to be shipped to Gaza, though the truck could not properly accommodate all of the donkeys.

Several donkeys were spotted accidentally trampling one of the donkeys in a Gaza-bound shipment from Israel, N12 reports.

In a case of animal cruelty, the donkeys were loaded up onto the bed of a truck to be shipped to Gaza, though the truck could not properly accommodate all of the donkeys. As the truck continued its journey, one of the donkeys fell and was accidentally trampled by the other donkeys, who could not move out of the way and rescue their fellow donkey due to space constraints.

The donkeys, who were kept in close proximity in an overly-populated truck, seemed to notice that one of the donkeys had slipped under their feet. "You can see two donkeys laying their heads on another donkey, it indicates their great fear, this is the donkeys' way of comforting each other," Sharon Cohen, founder and director of a rehabilitation center for animals, said.

"The transfer of the donkeys is taking place in a terrible way," Cohen told N12. "They are crammed in there and no one bothers to check it at all.” 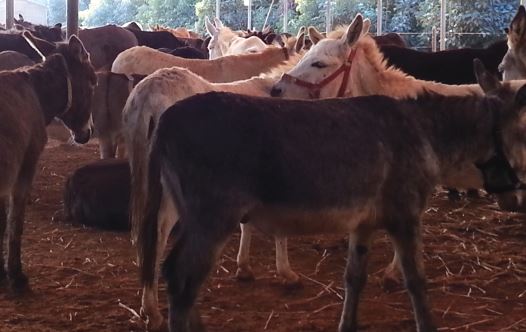 Worse than that, Cohen adds, is what the donkeys are being transported for. “These donkeys are moving from here to Egypt for the benefit of the skins and meat industry. The donkeys have a special leather material that sells for a lot of money.”

"We do not know where the donkeys came from or what they are intended - whether for work, slaughter or raiding, but this is the inevitable result of treating animals as a product and commodity,” Yael Arkin, CEO of Let the Animals Live, told N12. “As their 'monetary value' declines, they face a cruel death, whether used to carry loads or as machines for issuing milk and eggs,” Arkin concluded.

The Ministry of Agriculture responded to the story, saying that "On the face of it, watching videos and photos raises the suspicion of violating the Animal Cruelty Law. This case did not reach the Ministry and is not known and therefore difficult to answer…. A specific permit for each transfer and a suitable vehicle by which the transfer can be made. Regarding export or import, approval from the relevant parties is also required."

Despite this response, Cohen was not pleased, declaring that she “Hope(s) that by 2022 the State of Israel will respect animals and their basic rights a little more.”