"The war in Ukraine should be a warning sign regarding Israel's readiness for wars,” comptroller Matanyahu Englman said. 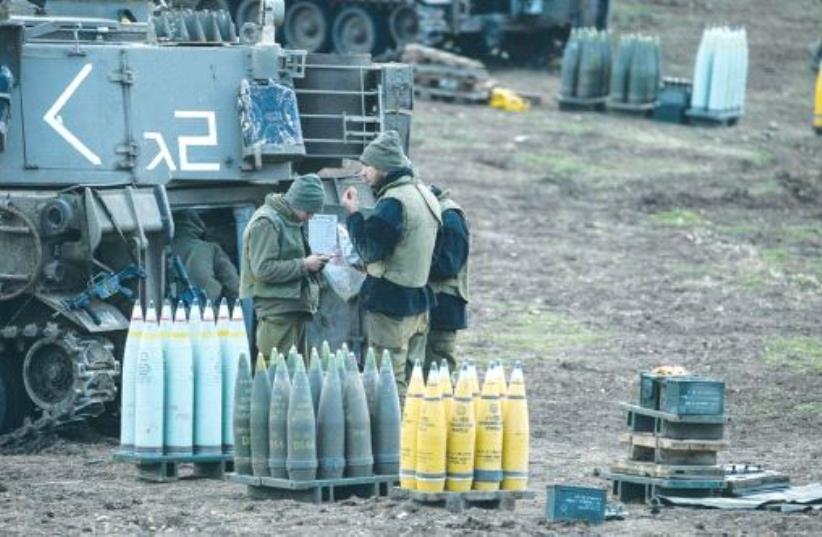 IDF SOLDIERS stand next to ammunition and a mobile artillery unit near the border with Syria last year.
(photo credit: REUTERS)
Advertisement

The State Comptroller’s Report released on Wednesday said that gaps were found in defense-related inventory levels in critical areas such as ammunition and spare parts, despite goals set in the IDF’s previous multi-year plan.

The report, which was submitted to Prime Minister Naftali Bennett and the Knesset’s State Audit Committee in December, examined the IDF’s compliance with some of the goals set by its Gideon multi-year plan in terms of budget, management and control.

The Gideon plan was formulated under previous IDF chief of staff Lt.-Gen.(res.) Gadi Eisenkot, and set the military’s work plan from 2016 to 2020.

The plan included the restructuring of the army by eliminating thousands of reservists and career soldiers in order to save billions of shekels in salaries and pensions. The expected result, according to senior officials, would be a smaller but better prepared, equipped and trained army.

While one of the key goals and top priorities of Gideon was to increase the IDF’s readiness for war, State Comptroller Matanyahu Englman found large gaps between the inventory levels of spare parts and ammunition in certain areas of the military at the end of 2020 and the targets that had been set.

IDF SOLDIERS carry light anti-tank weapons as they prepare to send more ammunition to their counterparts in the Strip. (credit: BAZ RATNER/REUTERS)

When current Chief of Staff Lt.-Gen. Aviv Kohavi began his term, he assumed that the Gideon plan would end in 2019 and that his Momentum plan would begin in 2020. However, when the audit was finished in June, the political-security cabinet had not yet approved Kohavi’s multi-year plan, and no budget had been agreed upon due to the numerous elections in Israel and the lack of a state budget.

When the budget was finally approved in November, the IDF announced that it would be significantly increasing the number of precision munitions in its arsenal in the coming years.

The number of munitions that the Israeli military will purchase from the United States will be substantially larger than what the IDF previously held, due to the increase in threats facing the country and in targets gathered by the military.

Israel has purchased tens of thousands of precision-guided munitions from the US in recent years, and used hundreds of joint direct attack munitions (JDAMs) during Operation Guardian of the Walls in May, leading to precision strikes on targets in the densely populated Gaza Strip.

Though all JDAMs have been replenished by Washington, a senior officer told The Jerusalem Post that with the passing of the budget, the military plans to acquire far more than ever before, by 2024 – and even more by 2030.

THE DEFENSE Ministry said in response to the comptroller’s report that the “multi-year Gideon plan for the year 2016-2020 is an expression of the long-term planning and implementation ability of the IDF and Defense Ministry, and enables optimal utilization of the budget while promoting long-term moves.”

According to the ministry, the rigidity in the budget “stems from the large-scale cuts imposed on the defense establishment in recent years that damaged the ability to implement the plan.” The ministry noted that having no state budget for two years of the plan “also affected the ability to operate” in a flexible manner “in the face of all the needs, limitations and constraints.”

The audit also found that defense ministers did not report to the Foreign Affairs and Defense Committee on the implementation of the Gideon multi-year plan except in 2018, about three years after the plan began.

“This is not in accordance with the decision of the cabinet, which imposed on the defense minister to report to him once a year,” the report said.

The Defense Ministry said in response to the comptroller’s report that there is a “continuous dialogue about compliance regarding plans and projects. In accordance with the auditor’s recommendations, the defense establishment will present its compliance with objectives transparently.”

In addition, the audit revealed that from April 2018 until June 2021, there was no computerized information system used by the IDF General Staff during discussions surrounding the implementation of work plans, despite instructions that require its use.

Not doing so “undermined the effectiveness” of the chief of staff to oversee and inspect, the report said. As part of the recommendations following the audit, the state comptroller recommended that the general staff use a computerized information system for its work plans.

The ministry said that the issue of a computerized system was “addressed and use was made of the system.”

“The war in Ukraine should be a warning sign regarding Israel’s readiness for wars,” Englman said. “Wars are not a thing of the past. Correcting the shortcomings and implementing the recommendations in the report published today will help Israel’s readiness in the face of possible aggression against us.”

The military said in a statement that “the findings of the reports were examined and studied in depth in the IDF, following which a wide range of staff work and changes were carried out in order to implement the report’s recommendations.”