ONE OF America’s well-known rabbis, Haskel Lookstein, turned 90 in March, but to look at him and listen to him, one would never know it. Lookstein, who is rabbi emeritus of Congregation Kehilath Jeshurun, on New York’s Upper East Side, likes to come to Israel for at least one of the three pilgrimage festivals. When he comes, he leads part of the service at HaZvi Israel congregation in Talbiyeh.

He was in Jerusalem for Passover and last Shabbat led the Mussaf prayers, before which he read out the prayer for the State of Israel, the soldiers who defend it and those who made the supreme sacrifice in doing so. He did this with dramatic impact and with great feeling, unlike so many locals, who just whiz through it as a matter of course.

When it came to singing the kedusha, Lookstein, mindful that this week was Holocaust Remembrance Day (Yom Hashoah), sang the first two verses to the tune of “Partisans’ Song,” and the third and fourth verses to the tune of “Ani Ma’amin” (I believe with a perfect faith in the coming of the Messiah). The modern and best-known version of Ani Ma’amin is believed to have been composed by David Fastag, a Modzitzer hassid, who often composed melodies to please the Moditzer Rebbe; the Moditzer Hassidim are known to be very musical.

This final melody of Fastag’s was composed in a cattle car headed for Treblinka and was inspired by the sound of the moving train. The rebbe had succeeded in escaping from Europe in 1940, and Fastag offered his own portion in the world to come to anyone who could learn the tune and take it to his rebbe.

Two men were willing to take the risk, learned the tune and jumped from the moving train. One lost his life in the fall, the other survived and brought the tune to the rebbe’s son in Israel, from where it was disseminated around the world. This is the tune that Lookstein sang, reminding the congregation that while we have just completed celebrating the Festival of Freedom, we should never forget the painful chapters in our history. 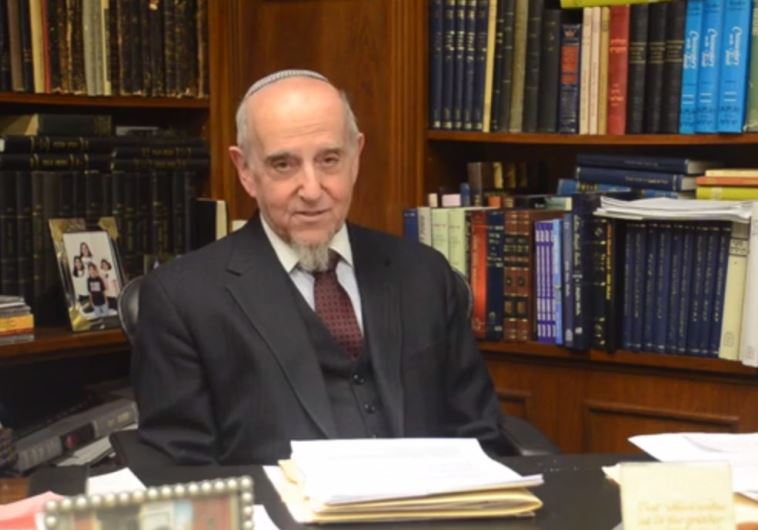 ■ APROPOS HAZVI Israel, this congregation has a tradition early each spring to take a tour around the vicinity of the synagogue to look at the awakening of the blooms and to recite the prayer over new buds. The tour is led by agronomist Dr. Israel Galon, who not only knows his botany but also his Judaism and happily has a well-developed sense of humor. Galon says that he is in conflict with many Orthodox rabbis who don’t know the difference between a sprout and a bud. The prayer should be said once trees have begun to bud and even to display fruit or blossoms but not over a mere sprout, which is so small that it can barely be seen.

■ THE LARGE number of ultra-Orthodox, modern Orthodox, Chabad, Conservative and Reform synagogues in a 2-3 km. radius in Rehavia-Talbiyeh and their adjacent neighborhoods has been noted before in this column, but now there is also the addition of a congregation on Radak Street that conducts its services in accordance with the traditions of the synagogue of Rome.

Unlike his two immediate predecessors, President Isaac Herzog attends the daily morning services, partially because he is mourning for his mother who died early this year, but also because that’s the kind of person he is. The other congregants feel that his staff is being unfair to him by organizing early morning appointments for him, which does not allow him much breathing space after the service. Sometimes the service has to be rushed because Herzog either has a very early appointment in his office or because he has to travel to another part of the country.

■ ON JUNE 13, providing his government does not fall in the interim, Naftali Bennett will celebrate his first year in office as prime minister. In all that time he has not lived in the prime minister’s residence on the corner of Smolenskin and Balfour streets in Jerusalem. The excuse given is that he was advised by the Shin Bet (Israel Security Agency), that the residence was lacking in adequate safety features, and for his own security and that of his family, he should not move in.

Curiously, throughout the quarter of a century that passed since the assassination of prime minister Yitzhak Rabin, security features have constantly been added to the house and to the two streets that border it, without a series of prime ministers having to move out, so this excuse sounds thin, especially in view of other heavy construction in the neighborhood where much larger projects are finished or near completion since Bennett took office.

Jerusalem Day falls at the end of May this year. It celebrates the reunification of Israel’s eternal capital. How does it look to the world when Israel’s prime minister instead of living in Jerusalem, whether in the official residence or at one of the top security hotels, prefers to live in his private home in Ra’anana (which has had a considerable security upgrade paid for by the taxpayer)? Ra’anana is a very nice place to live but it is not the capital of Israel. Bennett – by living there instead of in Jerusalem – negates the importance of the capital which is the seat of the President, the Supreme Court, the Chief Rabbinate, the Knesset, the Jewish Agency, Yad Vashem, and the final resting place of the leaders of the nation yet not the place of residence of Israel’s prime minister.

■ THE ANNUAL general meeting of the Foreign Press Association is traditionally held at the King David Hotel in Jerusalem, after which there is a guest speaker – usually a member of the government. This time it was Transportation Minister Merav Michaeli, who at question time was asked where she stood with regard to the proposed cable car to the Western Wall. Michaeli replied that she was not an expert on the subject, and that it was not an initiative of the Transportation Ministry. “We are not pushing it,” she said, but noted that it had been approved by previous governments. “We don’t oppose it,” she continued, “but we don’t see it as a transport solution.” However, together with other ministries, her ministry is promoting electric vehicles in the Old City in order to reduce both noise and pollution.

■ THE NEW chairman of the Foreign Press Association is AFP bureau chief Guillaume Lavallée, a Canadian national assigned to cover Israel and the Palestinian territories. Prior to taking up his post in Jerusalem, he was based in Paris, Islamabad, Khartoum and for two years taught journalism at Université du Québec à Montréal. He is also the cofounder of the Québec Fund for International Journalism. He succeeds CNN’s Jerusalem bureau chief Andrew Carey, who was unable to present his annual report because he was covering the war in Ukraine.

Instead, the report was presented by FPA treasurer and former chairman Joe Federman who is the AP news director in charge of Israel, the Palestinian territories and Jordan. Part of the report read out by Federman, could easily have been his own when he served as chairman.

Two major challenges faced by the FPA are the difficulty in getting permits for Gaza-based journalists working for foreign media outlets to enter Israel, and the other is the appointment of an English language police spokesman. Police are anything but kind to journalists; often mistreat them and cause them harm. When an FPA journalist is hurt by a police officer, as recently happened more than once, there is no official address for complaints.

■ EVERY YEAR between Holocaust Remembrance Day and Israel Independence Day, a festive reading of the Proclamation of Independence Scroll with trop (cantillation) is held at the egalitarian section of the Western Wall. This year it will be held at 6:30 p.m. Israel time on May 1.

It will be broadcast live in different languages to the entire Jewish world by way of celebrating Israel’s Independence Day on a global basis and strengthening the sense of Jewish peoplehood in Israel and abroad. Opening remarks at the event will be made by retired justice Elyakim Rubinstein, a former vice president of the Supreme Court. Israelis and visitors to Israel will be able to participate in person.