Israel to help the Philippines modernize its armed forces

Israel has faced criticism for its arms sales to Manila, seeing as Philippine president, Rodrigo Duarte, has equated himself to Hitler.

Israel will help modernize the Philippines Armed Forces by providing military technology and other systems.

“We have exchanges on different levels in bringing in different technologies and systems which can be used by the [Philippine] Navy, the Army, the Air Force [and] the PCG [Philippine Coast Guard]. So, we’re in touch with different military branches here,” Israel’s Ambassador to the Philippines Ilan Fluss was quoted as saying by The Manila Times.

Fluss said that defense cooperation is “done government-to-government, and leading Israeli companies can introduce their technology and best practices,” to help Manila update its military.

“I think it’s important because it contributes again to peace and to the safety and security of both the Filipino people and the Israelis alike.”

The two countries maintain close security ties, with Israel having sold a large amount of weaponry to the Philippine Army over the years. Recently, the overall flow of arms to the region has spiked with tensions in the South China Sea. 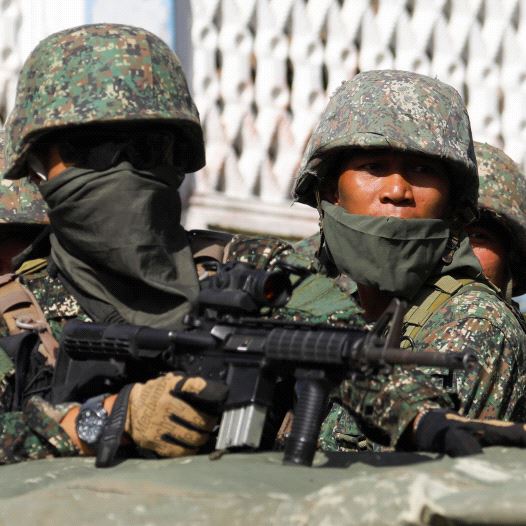 Members of Philippine Marines are pictured aboard a vehicle as more soldiers reinforce to fight the Maute group in Marawi City in southern Philippines May 29, 2017 (credit: REUTERS/ERIK DE CASTRO)

“The bilateral ties and strong defense and military partnership of the Philippines and Israel were among the highlights of the discussions during Ambassador Fluss’s courtesy call on the Navy chief,” PN spokesperson Commander Benjo Negranza was quoted as saying by The Philippine News Agency.

The Philippine Navy will be acquiring eight fast-attack interdiction craft-missile ships (FAIC-M) in a government-to-government procurement agreement. The agreement was awarded to Israel Shipyards and Rafael Advanced Defense System and divided into two lots.

According to Negranza, “Lot 1 covers the delivery of nine platforms, four of which will be missile-capable, and the upgrading of the Naval Shipyard for the establishment of a local production line as part of the transfer of technology.... Lot 2 includes the integration of weapons and combat systems.”

The first two ships are set to arrive toward the end of 2022 and are part of Duterte’s Horizon 2 Revised Armed Forces of the Philippines Modernization Program.

Israel has faced criticism for its arms sales to Manila. In 2019, human rights attorney Itay Mack and other Israeli attorneys filed a lawsuit with the High Court demanding that Israel refrain from selling arms, weapons systems and military defense systems to the Philippines, saying it is a country that violates human rights.

The lawsuit said that Philippine President Rodrigo Duterte is “a mass murderer, supports violence against women, has bombed the schools of minority children and has equated himself with Hitler.”