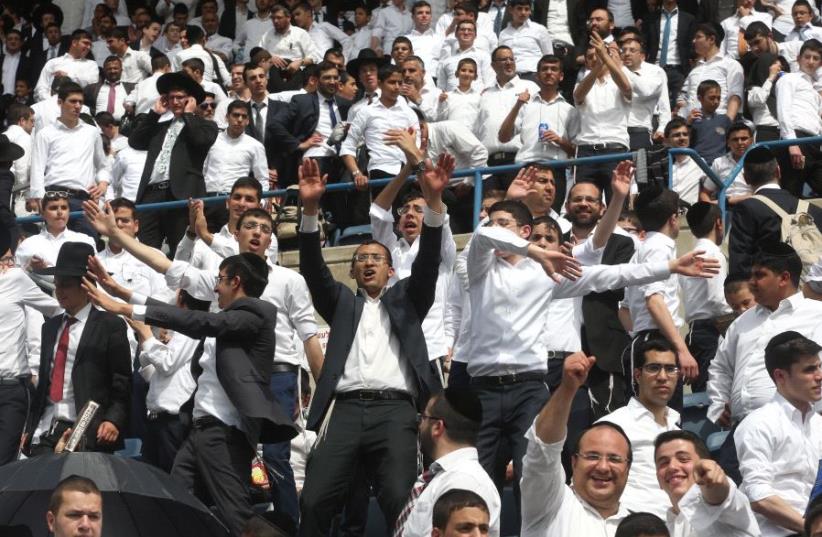 Haredis at Shas event
(photo credit: MARC ISRAEL SELLEM)
Advertisement
A poll for the Hiddush religious pluralism organization has shown that 65% of Israeli-Jews want a government without haredi (ultra-Orthodox) parties United Torah Judaism and Shas in order to advance haredi military enlistment and pluralism and religious freedom in public Jewish life.Some 80% of secular citizens polled said they wanted a coalition without the haredi parties, along with 31% of national-religious voters.In total, 35% of those polled said they wanted any new government to include the haredi parties and preserve the status quo on religion and state in Israel, including 81% of haredi voters and 69% of national-religious voters.Some 96% of those polled who said they will vote for the Blue and White Party said they wanted a government without the haredi parties – along with 46% of Likud voters, 82% of Kulanu voters and 100% of Labor voters.Some of the crucial issues receiving high priority for reform were public transport on Shabbat, civil marriage, haredi enlistment to the IDF and cuts to the haredi yeshiva budget.The poll was conducted by the Smith Institute between March 17 and 18 on a sample of 600 Jewish Israelis with a margin of error of 4%.Prime Minister Benjamin Netanyahu has formed a strong alliance with the haredi parties and given way to many of their demands on matters of religion and state.In return, they have been loyal political allies and have vowed to recommend only him to the president for the tasking of forming the next government.Leader of the Blue and White Party Benny Gantz has set out an agenda to provide greater freedom and pluralism for religious life in the public realm.Recordings of Gantz were, however, recently disclosed by Channel 13 where he stated that he would give the haredi parties broad leeway to determine policy on religion and state matters in order to get them to back him and join a government led by him.“I will send you an empty sheet signed Benny Gantz, two-thirds are yours and you can fill out what you want, leave me a third and I will fill out what I want,” he said he would tell the haredi parties when it comes to forming a coalition.“The public wants action, not words – a change in policy and not promises for meaningless dialogue,” said Hiddush director Rabbi Uri Regev.“Comments of the leader of Blue and White about an agreement with the haredim by giving them a blank sheet where they can get their demands are in total opposition to the will of their potential voters.”