The Palestinian land grab of Judea and Samaria

The startling statistics show that in just the past two years, from 2019 to 2021, the Palestinians have built a whopping 5,907 illegal structures in Area C.

Earlier this week, in a meeting at the Knesset, new data was revealed that should set off alarm bells concerning Israel’s future.

At a hearing held by the parliamentary Land of Israel Caucus, Meir Deutsch, director-general of the Regavim movement, unveiled his organization’s findings regarding illegal Palestinian construction in Area C, the portion of Judea and Samaria that is under full Israeli military and civilian control.

The startling statistics show that in just the past two years, from 2019 to 2021, the Palestinians have built a whopping 5,907 illegal structures in Area C, which averages out to seven new illicit buildings per day, or about one every three hours.

Add to this the already large number of unlawful Palestinian buildings erected over the years, and the overall tally for Area C has reached an unprecedented 72,274 structures.

In addition, the Palestinians have been launching agricultural and infrastructure projects which have enabled them to swallow up a total of 9307.1 hectares, or 23,000 acres, of Israeli state-owned land. 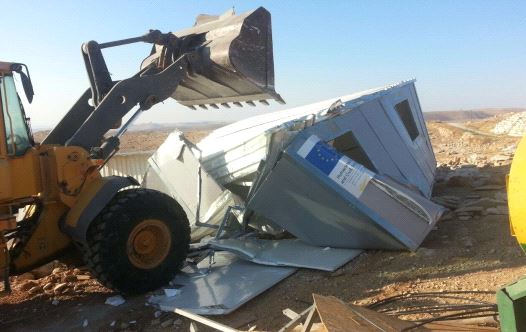 That is equivalent to an area three-fifths the size of Washington, DC.

In a statement, Regavim noted that “By planting hundreds of thousands of trees in the undeveloped open spaces of Area C, creating agricultural roads spanning dozens of kilometers each year, digging wells, cisterns and water delivery and irrigation systems,” the Palestinians are “wresting land rights from the State of Israel and establishing de facto Palestinian control.”

In effect, the Palestinian Authority, aided by funding from the European Union, is undertaking a systematic and coordinated land grab, with the aim of laying the foundations for a Palestinian terror state.

Worse yet, Israel is doing precious little to counter the Palestinian purloining of state land, focusing instead on demolishing unauthorized Jewish construction.

Indeed, on the same day that the Regavim report was released, the Israeli Civil Administration, in an act rife with irony, dispatched manpower and bulldozers to destroy a Jewish-owned vineyard at Amona, a community that was fully evacuated in February 2017.

So while the Palestinians are busy setting up illegal villas, schools, farms and other edifices with impunity, the government is instead devoting its attention to uprooting Jewish orchards, as if that was the primary issue on the ground.

The lack of enforcement has led to increasing anger and dismay among Jewish residents of Judea and Samaria, and rightly so because much of the Palestinian construction is strategically aimed at choking off Jewish communities, limiting their potential growth and encircling them.

The Palestinian Authority effort extends not only to areas adjacent to the territory already under its control but also includes locales such as Gush Etzion, which nearly the entire Israeli political spectrum agrees will be part of the Jewish state.

Earlier this year, in February, after the Palestinians built four illegal structures on state-owned land that belongs to Nokdim, a Jewish community in Gush Etzion south of Jerusalem, hundreds of Jewish residents organized a protest to get the government to act. Similar rallies have been held elsewhere to bring pressure on the authorities, who have thus far proven to be decisively indecisive about taking action.

It is important to note that Israel’s passivity on this issue stretches back for decades. The problem has festered for years, regardless of who has been in power, and it continues to snowball.

The danger this poses cannot and should not be understated or ignored.

Key strategic points, such as roads and mountain passes, as well as ancient Jewish historical and religious sites, are steadily being taken over by the Palestinians.

This harms Israel’s security, endangers the Jewish presence in Judea and Samaria and creates Palestinian facts on the ground that will be difficult to undo.

From north to south and east to west across Judea and Samaria, the Palestinians are seizing territory with wild abandon.

Rather than negotiate with Israel, the Palestinian Authority is simply enlarging the areas under its influence and control.

It is time to put a stop to this.

To begin with, Israel’s Civil Administration needs to begin enforcing the law and take swift action to demolish illegal Palestinian structures built on state land. No country in the world would permit a foreign entity to seize its land in such a fashion and neither should Israel.

Israel should also put the Palestinian Authority on notice that its encouragement and assistance to those engaging in the land grab will carry a price in the form of deducting funds from any tax and customs transfers to Palestinian coffers.

Finally, Israel should lodge a firm diplomatic protest to the European Union and its member states, which are facilitating and funding the Palestinian campaign. It is inconceivable that the Jewish state will remain silent in the face of Europe’s backing for this devious undertaking.

For 1,900 years, the Jewish people yearned for this Land, praying to return and reclaim the soil where our forefathers lived. Sadly, the State of Israel is steadily allowing large swathes of our ancient patrimony to be swallowed up by illegal Palestinian construction. This cannot be allowed to continue. 

The writer served as deputy communications director under former prime minister Benjamin Netanyahu during his first term of office.