He had immediately set the tone. Egypt and Syria were the aggressors, Israel was resisting. And Israel had stood alone – “by its independent effort and sacrifice.” 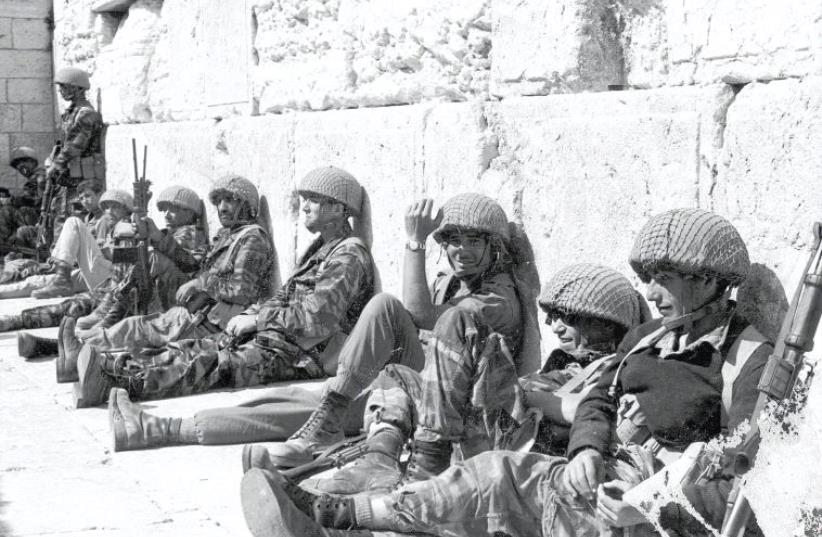 IDF Paratroopers relax after liberating the Western Wall during the Six Day War
(photo credit: IDF SPOKESMAN’S UNIT)
Advertisement
READ IT again. Rub your eyes. Read it a third time. How in heaven’s name could three men lying on a floor in New York help win the Six Day War? These were not three ordinary men. Two were quite extraordinary: one was the head of a major US public relations firm, a Jewish American; the other was a highly renowned graphic designer, a Japanese American. The third was my humble self.The floor also needs introduction. It was the carpeted floor in the office of the consul-general of Israel in New York, the best air-conditioned room in the old four-story brownstone on East 69th Street. It was a hot night, June 6, 1967, the second day of the Six Day War. We continued meeting into the early hours of June 7.

In order to understand why we were there, we must go back a decade, to 1956: Egyptian dictator Gama Abdel Nasser had blockaded the narrow bottleneck entrance to the Red Sea and to Eilat, the port of entry for oil for the country’s power stations. Nasser was defying the West as well by nationalizing the Suez Canal.Israeli forces swept through the Sinai Peninsula. In 100 hours, Israel had pushed Egyptian troops out of Sinai and opened the Straits of Tiran.The American public was not aware of Israel’s situation until the campaign broke out. The American government had not been involved beforehand and the State Department was led by pro-Arab professionals under secretary of state John Foster Dulles. Israel had won a war but lost US public opinion.Under American pressure, the IDF withdrew from the peninsula in March 1957. The Sinai campaign of 1956 had wrung two guarantees from the US and the UN. First, that the Sinai Peninsula would be patrolled by a United Nations Emergency Force; second, that the Straits of Tiran leading to Eilat would remain open.Ten years later, in May 1967, Nasser had packed the Sinai with Egyptian soldiers and Soviet-supplied tanks, and again blockaded Eilat. The UN folded its tents and ran. The US and UN guarantees proved worthless, and American President Lyndon B. Johnson, who was unable to get any other nation to help open the Straits, tacitly withdrew his opposition to an Israeli first strike. It took three weeks, from May 15 until June 5, for then-prime minister Levi Eshkol to make sure that the US would not oppose Israel’s action against Egypt and its Syrian partner. This waiting period saw mass graveyards consecrated by the IDF rabbinate, and trenches dug in Israeli cities. Fear was palpable of an Egyptian first-strike that would use Soviet-supplied tanks and planes.The Israeli missions in Washington, DC, and New York, and consulates-general in other key locations began working overtime to win the war of public opinion. Israel did not want to have a repeat of 1956.At that time, while pursuing advanced degrees in New York, I had been tasked by the Prime Minister’s Office to prepare the American end of the Jerusalem Economic Conference. This was projected for 1968 to help pull Israel out of an economic recession.When Nasser blocked the Straits on May 22, 1967, obviously a casus belli, I put myself at the disposal of consul-general Michael “Mike” Arnon. I recall saying something like, “Mike, we are at war. It is only a question of when it starts on the battlefield.”Somehow I had begun encouraging and channeling a groundswell of thousands of opinion leaders who spoke out in favor of keeping the Straits of Tiran open. Thousands of professors and thousands of rabbis filled two-page ads in The New York Times. These were copied in other major cities. Martin Luther King Jr. joined Rabbi Abraham Joshua Heschel in a powerful ad in the Times on June 4, a day before the war broke out.On the first morning of the Six Day War, Israel destroyed most of the Egyptian and Syrian air forces. Nasser lied to Jordan’s King Hussein on that day and told him the opposite: that Egypt had wiped out the Israeli air force, so Hussein had to fall in line and attack Israel.Once war began, we had to make sure that Israel would not be pressured to stop its advance or to withdraw until its political aims were met. These aims were never set out for us, though we assumed that they would involve withdrawal for peace. But who thought in the long term? We had to win public opinion while the battles raged.At that point, Israel’s foremost spokesman, foreign minister Abba Eban, flew in haste to New York, and on the plane penned one of the greatest speeches made at the United Nations. In his grand oratorical style, Eban – always a diplomat – made Israel’s case while subtly playing on the guilt the UN should have felt for abandoning its responsibilities, which Israel then had to enforce in 1956 and yet again in 1967. The date was June 6, 1967, a day after the war began. 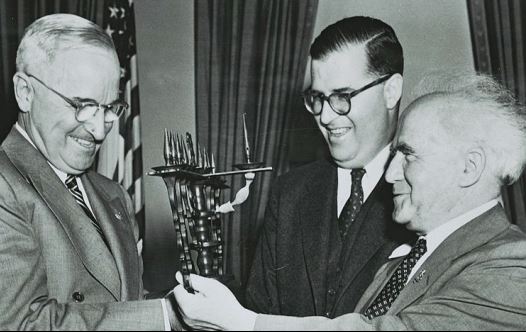 Abba Eban and prime minister David Ben-Gurion visiting US president Harry Truman, 1951. (Fritz Cohen)Eban was born in South Africa and grew up in England. After doing brilliantly at Cambridge, he served as a major in the British army. Eban was a linguistic genius, speaking 10 languages, and after Winston Churchill, was the greatest orator of the time.The foreign minister began, “I have just come from Jerusalem to tell the Security Council that Israel, by its independent effort and sacrifice, has passed from serious danger to successful resistance.”He had immediately set the tone. Egypt and Syria were the aggressors, Israel was resisting. And Israel had stood alone – “by its independent effort and sacrifice.”
50 years ago today - Six Day War project (credit: Courtesy)
He described the frightening days preceding June 5. “There was peril for Israel wherever it looked... Its streets were dark and empty. There was an apocalyptic air of approaching peril. And Israel faced this danger alone... Now there could be no doubt about what was intended for us. With my very ears, I heard president Nasser’s speech on the 26th of May. He said, ‘We intend to open a general assault against Israel. This will be total war. Our basic aim will be to destroy Israel.’” His speech was close to 5,000 words in length, and is well worth looking up on the Internet. In measured and careful language, he not only made clear who was the aggressor, but also laid out a vision for regional peace.And this was his closing paragraph: “I think that Israel has in recent days proved its steadfastness and vigor. It is now willing to demonstrate its instinct for peace. Let us build a new system of relationships from the wreckage of the old. Let us discern across the darkness the vision of a better and a brighter dawn.”Now we return to the three serious men on Mike Arnon’s floor in the consulate-general’s office. We knew that the speech was a major opinion-maker and had been broadcast live on television. In the era before today’s social media, we used the next best tool available: records. That’s what brought the three together. Who were the two Americans? The first was David Finn, co-founder of the important public relations firm, Ruder Finn, who had offered his services to help us. For most of those six days, as well as before and after, he devoted almost all of his time, talents and strengths to helping Israel. Neil Fujita was a noted graphic designer, and a partner with Ruder Finn in a joint company specializing in design. Both men were veterans of World War II. Fujita, who had been born in Hawaii to Japanese parents, in spite of having been interned by the US government in the swell of racist fears spawned by Japan’s attack on Pearl Harbor in 1941, had served in the crack Japanese-American unit fighting the Nazis. Both must have had the Holocaust as a major impetus for what they were doing. We sprawled on the floor with copies of the speech in our hands and a “dummy” of a jacket for the 33 and 1/3 LP (long-playing) records. Finn and Fujita had arranged that Columbia Records would press the records immediately and get them out post-haste, but needed the text of the cover right away. I had suggested putting the entire text on the back of the jacket. But what to put on the front? From here on, my memory of the discussion becomes hazy. We were all exhausted, having spent much emotion and adrenaline. By then we were really “floored.” Suddenly Fujita, in a stroke of genius said, “Let’s put the speech on the front cover!” That settled it. Eban spoke on Tuesday, June 6, and the records were out within two days. We were sure we had helped sway public opinion and thus helped “win” the war.As I write this column, I clearly see three men on a floor in a wan light convinced that what they were doing counted. And no, I was not smart enough to get a record for myself.