Sukkot miracles that saved us

Another strand of the Sukkot story, in addition to dwelling in booths as we are commanded, concerns rejoicing with a lulav.

Sukkot is a multipurpose festival, for there are many strands coming together for the central theme. One of them centers on three miracles.

After the Israelites were freed from slavery in Egypt, they wandered in the Sinai Desert for 40 years. It was a terrifying place – parched and dry, full of snakes and scorpions. It is hard to envisage surviving there for a week, let alone for 40 years.

The three miracles God provided were in the merit of Moses, Aaron and Miriam. The first was a cloud that traveled with the Israelites every day. It covered their heads as protection against the burning sun.

The second miracle was the manna that came down from heaven. It appeared mysteriously on the ground each morning, just waiting to be collected. On Fridays, there would be a double portion that provided the food also for Shabbat.

The third miracle was a lifesaving well. It looked like a rock and was about the size of a beehive. Sweet water shot high in the air from it, just like a geyser. It rolled up the mountains and down in the valleys with the people. When they encamped, it rested and it also watered the surrounding desert. 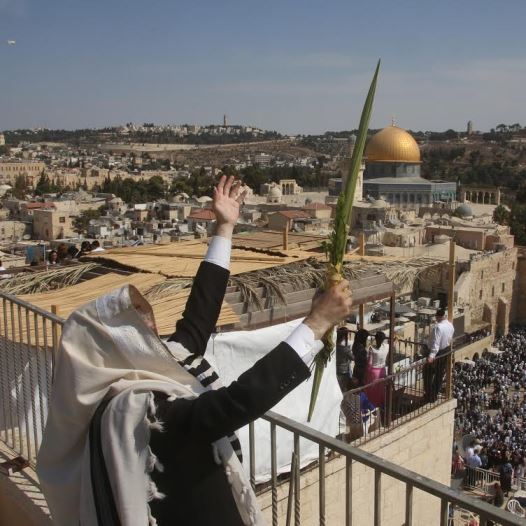 Another strand of the Sukkot story, in addition to dwelling in booths as we are commanded, concerns rejoicing with a lulav. This comprises a beautiful fruit, leafy branches and willow branches (Lev. 23:40). These are known as the Arba Minim or Four Species. The lulav is a young branch from a date palm, picked while the leaves are tightly furled against the spine. When you shake it, there is a rustling sound.

The etrog – the fragrant fruit – is a citron that resembles a lemon with the same bright yellow textured skin. Three myrtle twigs and two willow branches are attached to the lulav with a braided palm leaf. We hold them together – the lulav in the right hand and the etrog in the left – and wave the lulav after reciting a blessing: “Blessed are you, O Lord our God, Ruler of the universe, who makes us holy with mitzvot, and commands us to wave the lulav.”

May we all rejoice in our sukkah and remember the words of Rabbi Chaim Halberstam of Sanz: “There is no finer way to decorate a sukkah than seeing to it that the poor do not go hungry.” 

The writer is an Australian-born writer living in Jerusalem. The author of 14 books, her latest novel is Searching for Sarah. Blog: www.dvorawaysman.com