Former defense official: Iranian ship and Syria strikes may be the IDF

Even if the IDF has great defensive capabilities, Gilead explained that this is not enough to stop Iran from developing dangerous weaponry. 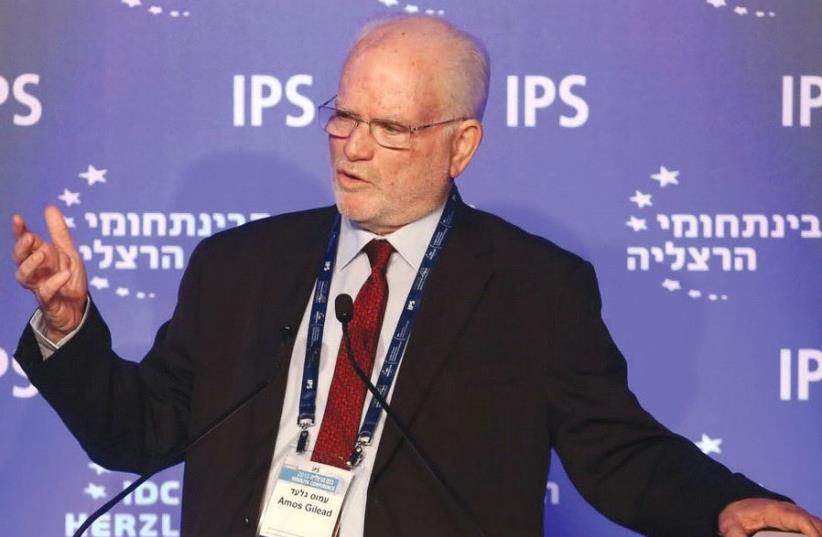 AMOS GILEAD speaks at a recent Herzliya Conference. ‘We are in a period of historic opportunity, with threats looming on the horizon’
(photo credit: ADI COHEN ZEDEK)
Advertisement
Former senior IDF and defense ministry official, Amos Gilead spoke with 103FM on Thursday, sharing insights on the recent explosion of Iran's ship and this morning's airstrike on Syria.
"These actions attributed to the IDF are operationally impressive, one action at a distance of 1,500 kilometers from our border, if we are indeed responsible for it," he told the radio hosts.
The IDF has been trying to prevent Lebanon from becoming a second front that could endanger Israeli citizens, he added.
Gilead also discussed the Iran Deal and critiqued Prime Minister Benjamin Netanyahu's handling of the situation. He explained that Netanyahu opposed the Iran Deal, but that Tehran's nuclear production halted after former US President Barack Obama finished his term in office.
"Let's compare data. He said the previous agreement led by Obama led to nuclear bombs," he said. "When Obama ended eight years in power, although the agreement was bad, the result was that the Iranian nuclear project froze, and the archives that the Mossad brought in also prove this."
However Gilead explained that now, Iran has resumed nuclear production plans.
"They are working on a precision project, missiles that are capable of hitting strategic targets with precision. Even though we hit them, they continue and we fail to persuade them to stop."
Even if the IDF has great defensive capabilities, Gilead explained that this is not enough to stop Iran from developing dangerous weaponry.
"The facts are that the nuclear agreement allowed the IDF to act in an amazing way, especially in Syria," Gilead said. "We are approaching a dangerous situation – who will help us? "Netanyahu attacks the President of the United States," he said. "The United States is a central pillar of Israel's national security."