An Iranian military official claims to have evidence. 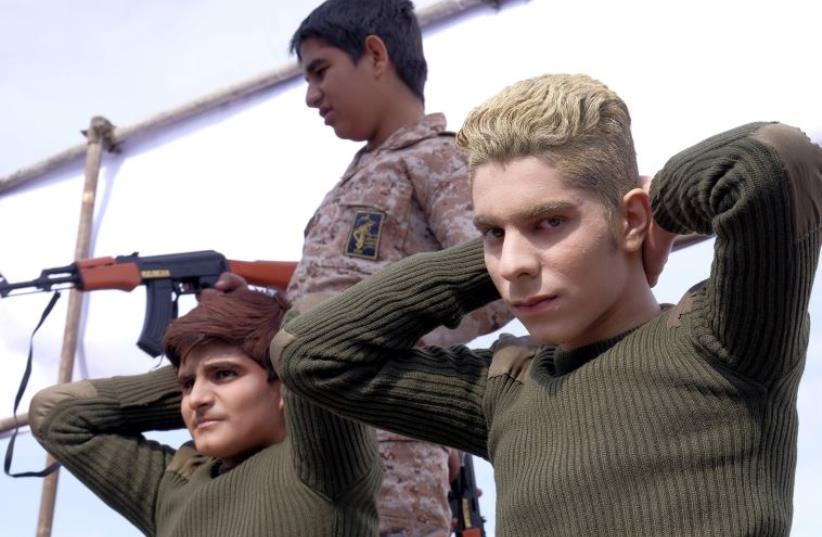 Iranian students re-enact a scene from the arrest of American sailors by Iran's Revolutionary Guard, during a ceremony marking the 37th anniversary of the Islamic Revolution, in Tehran February 11, 2016.
(photo credit: REUTERS)
Advertisement
Video surfaced on Friday morning of an Iranian revolutionary guard representative claiming that the United States is secretly supporting ISIS."The primary goal behind the recent announcement that Iran fired missiles into Syria, both accurately detecting and striking Daesh [ISIS] positions, was to show our weapons capabilities," Revolutionary Guard Media Adviser Hamidreza Moqaddamfar says in the video, referring to the missiles Iran fired into eastern Syria Sunday, aiming at the bases of militant groups it holds responsible for attacks in Tehran which left 18 dead last week.
Iran fires missiles at militant groups in eastern Syria (credit: REUTERS)
"There are plans to release documents revealing United States support for Daesh," he continued. "However, they are not documents like formal contracts or written texts, but they cover activities in the field, including locations where they provided help to Daesh. They show evidence of arms, logistical and medical assistance, which are all clues of American support for Daesh."The video, translated by Russian television network RT, appears to be sourced from Iranian SimaNews, and shows footage that is allegedly of an Iranian missile launch against terrorist bases in Syria. Reuters contributed to this report.