The social media giant provided no explanation for what defines “glorifying violence” and does not provide a way to report tweets specifically for this issue. 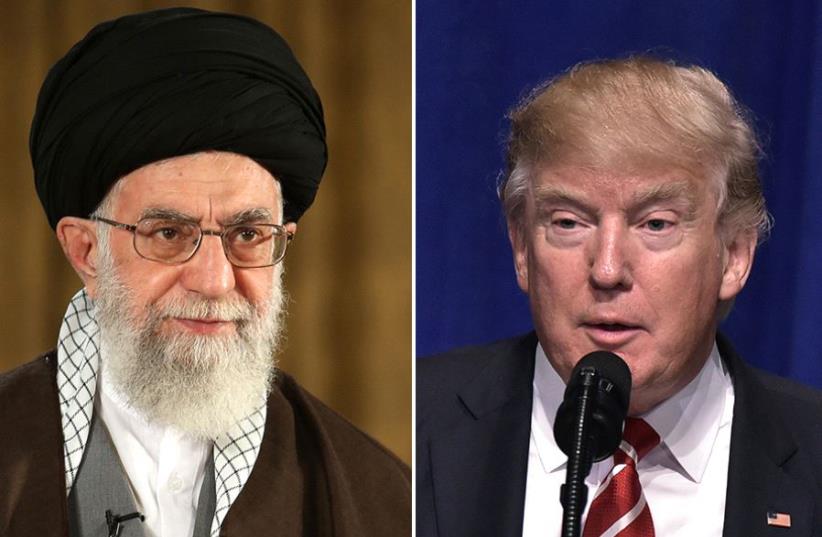 Trump and Khamenei
(photo credit: AFP PHOTO / HO / KHAMENEI.IR,MANDEL NGAN / AFP)
Advertisement
Twitter on Thursday flagged a tweet by US President Donald Trump for “glorifying violence,” disabling re-tweets and comments. In the tweet, Trump had written that “when the looting starts, the shooting starts.” Yet tweets by Iranian leader Ayatollah Ali Khamenei calling for arming Palestinians, destroying Israel and “Jihad” remained without similar flags. The company provided no explanation for what defines “glorifying violence” and does not provide a way to report tweets specifically for this issue.
The tweet that Twitter flagged included references to “thugs” and the clashes in Minneapolis after a police officer was caught on video putting his knee on the neck of George Floyd, an African-American man who later died, leading to days of increasing protests and clashes, including the burning of buildings. Twitter flagged the tweet and provided a link to “learn more” which explained that due to “public interest” it had allowed the tweet to remain online. This added to the lack of clarity over how Twitter makes decisions to flag certain tweets and why it has not singled out tweets by authoritarian regimes, such as Iran, which often glorify violence.
In recent weeks, as Iran’s regime sought to commemorate Quds (Jerusalem) Day, it has called Israel a “virus” and “cancerous,” and called for Palestinians to “liberate” the country. It has said they should be armed and that Iran supports Palestinian “fighters.” Khamenei tweeted on May 22 that “one cannot communicate with a savage enemy except by force.” A subsequent tweet urged “Jihad” against Israel: “everyone must help the Palestinian fighters.” He writes that  “the struggle to free Palestine is Jihad in the way of God, Victory in a struggle has been guaranteed because a person, even if killed, will receive ‘one of the two excellent things.’” This is a reference to religious rewards for being killed fighting nonbelievers. He also wrote that the “Zionist regime is a deadly cancerous growth” and that it must be “uprooted and destroyed.”

1. The struggle to free #Palestine is #Jihad in the way of God. Victory in such a struggle has been guaranteed, because the person, even if killed, will receive “one of the two excellent things.” Also, crimes against Palestine trouble any human’s conscience & inspire opposition.

Calling for a country to be uprooted, destroyed and calling it “cancerous” and urging armed fighters to be killed fighting it were not labelled as “glorifying violence” by Twitter. Instead, Khamenei’s incitement can be retweeted at will. This leads to questions about what standard Twitter uses and how it makes decisions. None of these details are provided transparently by the company. There is no way to report tweets specifically for this issue or find out what guidelines the platform uses to decide whether to publish them.
There are now increasing calls to regulate social media giants and see them as publishers of content, opening them up to lawsuits. The Trump tweets, including one that was flagged for inaccuracy recently, have become central to this discussion. It appears that Twitter singles out only those tweets for these new rules on fact checking and “glorifying violence.” It does not appear to flag other tweets with the same regularity or unique decisions. This leads to questions on why regimes such as those in Russia, Turkey or Iran can glorify violence or tweet misleading information. There are numerous videos on Twitter that appear to glorify not only violence but incite it against other people. For instance, during Turkey’s invasion of Kurdish areas there were videos by Syrian rebels showing them celebrating killing Kurds and calling to murder Kurds as “atheists” and “unbelievers.” Twitter regularly allows regimes to boast about their military prowess and post videos of militants. Over the years the company has cracked down on some types of extremism, such as ISIS supporters and far-right extremists in the West. However there are many videos and comments that could broadly be construed as “glorifying violence,” and it’s unclear why the words “when the looting starts, the shooting starts” were more egregious than other similar tweets or videos. It is unclear because there are not guidelines or transparency about the process by which it is determined what is flagged and what isn’t.
SOCIAL MEDIA giants have come under increased scrutiny in recent years after allegations they were used by “bots” and by governments to undermine elections. They were also exploited by extremists, including ISIS, to recruit and spread propaganda. Twitter, Facebook, Instagram and YouTube have taken different approaches. Facebook appeared to chastise Twitter's decisions on Trump, however it has been accused of having its own fact checkers. In other cases these platforms removed users for activity they did off the platform, getting rid of provocative figures such as Alex Jones or Laura Loomer. These platforms have also been accused of working with authoritarian regimes, such as Turkey and China, to remove critical content. Reports indicated that certain Chinese symbols were automatically censored by YouTube. During the pandemic, social media companies attempted to crack down on misleading information, however even these efforts were unclear as major countries put out contradictory information about basic aspects of the pandemic. Users feel decisions are opaque and arbitrary.  As with most issues there is no clear transparency about what is censored or why and how to appeal it.
All of these questions have led to concerns that social media giants play too much of a role in arbitrarily deciding what content to allow. At a time when democracy is under threat and powerful authoritarians run “bot armies” of supporters online and have state-sponsored media that spout propaganda, it is increasingly difficult for those in some democracies to know if they are being “shadow banned” or their content censored. In addition, most authoritarian regimes appear to get a quick response from social media when they demand that content be removed. For instance, an activist in Indonesia was targeted for writing about homophobia and government ministries in Indonesia have widely demanded content be removed. This may include material viewed as “blasphemy.” With social media users under siege and dissidents being hunted down in places for their social media posts, the lack of clear rules continues to fuel debates about what may come next for these increasingly powerful platforms, where many people today get their information.