Steinitz fires back at US energy minister: If I were American, I would oppose the Iran deal

Energy minister takes umbrage at Ernest Moniz's comment that if he were Israeli, he would support the Iran deal. 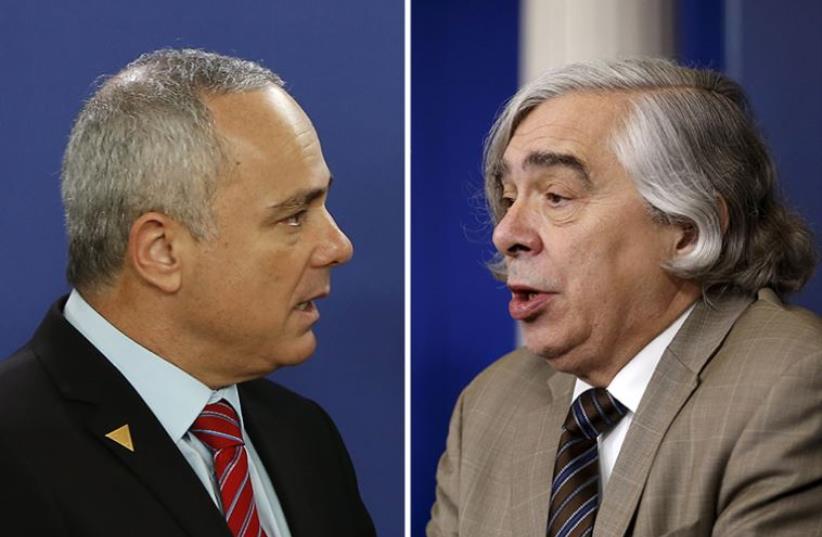 Steinitz and Moniz
(photo credit: FREEK VAN DEN BERGH / POOL / AFP,REUTERS)
Advertisement
WASHINGTON – Energy Minister Yuval Steinitz on Tuesday rejected his American counterpart’s assertion that the nuclear deal with Iran will take the existential threat against the Jewish state off the table.After US Energy Secretary Ernest Moniz told a delegation of Israeli reporters that if he were Israeli, he would he would support the agreement, Steinitz said that “if I were American, I would oppose the agreement.”Steinitz fired off a list of reasons detailing why, as an American, he would oppose the deal.“I would oppose the agreement because it ensures from the start that 10 years from now, Iran will become a nuclear power capable of producing dozens of atomic bombs per month.“I would oppose the agreement because it could lead to a nuclear arms race between Iran and the Sunni Arab states – in stark opposition to the declared American policy.“I would oppose the agreement because, even in the short term, inspections [of Iran’s nuclear facilities] are not immediate, or invasive enough, as was promised from the start.“If I was American, I would oppose the agreement, because it hurts the national security of the US, of Israel and of all the Western nations,” Steinitz said.
Iran deal in a nutshell
Moniz, in his comments to the visiting Israeli journalists a day earlier, had said that the deal reached between Tehran and world powers last month “does not change one iota who our friends and allies are in the region.”He defined America’s friends in the region as Israel, the countries of the Gulf Cooperation Council, and “a couple of Arab states.”Iran, he added, “does not move out of the box” unless its support for terrorism, Hezbollah, and instability in the region, as well as its human rights record, are addressed. In addition, he said, that country’s rhetoric about Israel will have to change “dramatically.”Moniz was the highest level administration official to meet the delegation, which is staying in Washington for three days before heading to New York. The reporters are guests of the Ruderman Family Foundation, which sponsors programs aimed at enhancing Israeli understanding of the American Jewish community.Moniz repeated the administration’s central argument that the agreement is not based on trust, but rather verification.He would not discuss the secret annexes to the accord – including one that reportedly allows the Iranians to provide their own soil samples to supervisors – saying these are agreements between the International Atomic Energy Agency and the Iranians.Jerusalem Post staff contributed to this report.s.