Jordan is falling apart and Israel could have helped - opinion

Israel missed a huge opportunity to team up with Jordan and set an example for the whole region about how making peace can benefit everyone.

By MARK LAVIE / THE MEDIA LINE 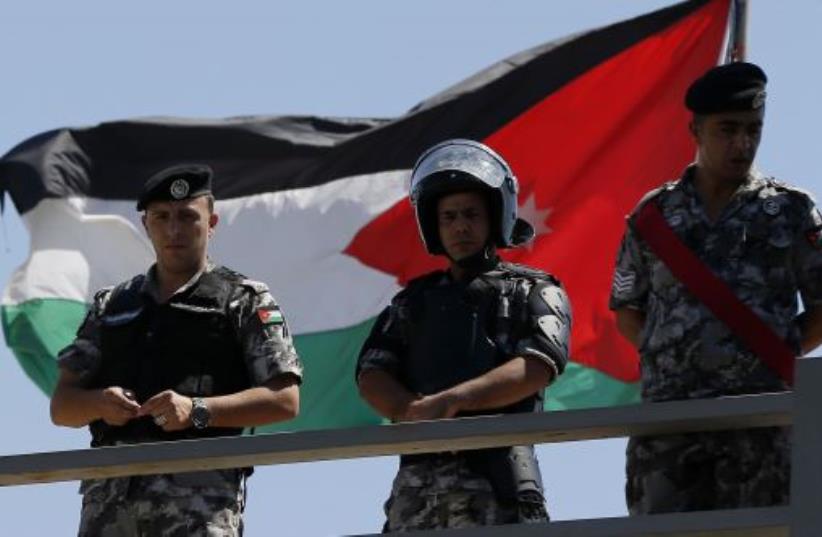 Jordan is in trouble. It’s facing internal, external, tribal and economic turmoil. King Abdullah’s hold over his land is wobbling.

Across the border in Israel, officials and experts are tsk-tsking, tut-tutting and making general plans for what the fall of the Hashemite kingdom would mean for Israel. This is not Israel’s fault – but it could have been so different.

Israel missed a huge opportunity to team up with Jordan and set an example for the whole region about how making peace can benefit everyone, such as joint projects with new factories, infrastructure, housing or agriculture.

It was a warm, sunny day in the Arava desert on Oct. 26, 1994, 27 years ago this week. We reporters were sitting in a grandstand not far from the stage where Israel’s Prime Minister Yitzhak Rabin and Jordan’s King Hussein led delegations in the peace treaty signing ceremony next to the border crossing between the two countries, about to be opened for the first time.

A newspaper reporter slapped me on the back of the head as I was broadcasting live for an American radio network. He said he couldn’t hear the ceremony. I just kept on broadcasting.

The significance of the event was clear. A year after Israel signed its first agreement with the Palestinians, Jordan joined the official peace parade after years of quiet cooperation. The Palestinians had to be first, because Jordan wasn’t strong enough to go it alone.

It still isn’t. That’s the key fact to remember in the face of expert analyses beginning with “Jordan has to… .”

By the time the treaty was signed, I’d been in Jordan a few times on assignment. I would fly to Cyprus, put my Israeli passport in a false bottom of my small suitcase, and fly from there to Amman, Jordan’s capital.

I have no doubt that Jordanian officials knew exactly who I was. I was just a few years removed from a 14-year stint broadcasting the news in English on Israel Radio on a transmitter so strong that it could be received clearly in southern Europe, much less Jordan next door. I joked that you could pick up Israel Radio there on an electric shaver.But as long as I behaved myself and followed the rules, they weren’t going to make any trouble.

After the treaty signing, my trips to Jordan were more routine. Once, at the border, a Jordanian customs official carefully inspected my tallit (prayer shawl) and tefillin (phylacteries), Jewish religious objects that I use every morning no matter where I am – but out of curiosity, not hostility.

There was a feeling of goodwill. One of my new friends was Metri, a travel agent who became a celebrity because of his support for Israel and its top basketball team, Maccabi Tel Aviv. Metri emceed a weekly quiz for tourists and reporters at Amman’s Intercontinental Hotel, and everyone had a good time.

A pair of well-known comedians included Israel in their sketches, to the delight of their audiences.

It was assumed that this was the start of a wonderful alliance; that Israel would step in and help Jordan modernize its economy, reduce unemployment and upgrade its communications. It wouldn’t even have taken much effort – based on gross domestic product, Israel’s economy in 1994 was 13 times the size of Jordan’s. Even if Israel had tosubsidize some of the projects for a few years, or longer, the benefits would have been astronomical.

Picture it: Jordan transforming itself, with Israeli help, into an efficient, modern, Western-style nation – a contrast to others nearby, like Syria, for example. While some talked of the price of peace, this would have been the prize of peace. But it never happened.

Largely ignoring Jordan, Rabin turned his attention back to the Palestinians. On my shelf is the 314-page “Israeli-Palestinian Interim Agreement on the West Bank and Gaza Strip,” signed in Washington on Sept. 28, 1995, a year after the Israel-Jordan treaty was signed.

Now we know that little came of that. Imagine how the region might have been transformed if Israel had put that much effort into developing its relations with Jordan instead.

But no. Gradually, with Israel’s inattention, Jordan’s goodwill eroded and then evaporated. Metri, the Maccabi Tel Aviv fan, was ostracized. The two comedians left the country.

Rabin was assassinated. His successor, Benjamin Netanyahu, paid no more attention to Jordan than Rabin did. Then King Hussein died.

Lacking his father’s charm and support, King Abdullah has been struggling to stay in power. In a county where a majority of the people are Palestinians, he has adopted a public line of harsh criticism of Israel, while maintaining the quiet cooperation. Israelis make fun of the king, asking why he doesn’t act like a monarch and change his policies.

Why? Because he can’t. He doesn’t have the resources or the power. Already strapped for cash, his regime is saddled with hundreds of thousands of refugees from Syria’s civil war. His little country must sway in the wind before the regional Arab powers – Saudi Arabia and Iran – and navigate a new reality in which Russia is on the ascendancy and the US is pulling back. Abdullah faces a near-impossible balancing act.

Learned analyses from Israeli think tanks tell us that Abdullah is in real trouble: Islamic extremists might take over, Palestinians might overwhelm his regime – and then Israel would be faced with a new situation.

Imagine instead what the situation could have been, 27 years after the peace treaty was signed that day in the Arava, if Israel had followed it up by helping turn Jordan into a beacon of beneficial peacemaking.