MK Itamar Ben Gvir set up a tent in Sheikh Jarrah after a home was set fire to, causing escalating protests.

MK Itamar Ben Gvir seen with Lehava chairman Benzi Gopstein during a protest against Israel's plan to demolish some houses of Palestinians in the East Jerusalem neighborhood of Sheikh Jarrah on May 6, 2021
(photo credit: OLIVIER FITOUSSI/FLASH90)
Advertisement

It has not been quiet in Sheikh Jarrah for a while, but this week saw a new and concerning level of conflict in the east Jerusalem neighborhood.

Violence has been prevalent in the area for some time, specifically surrounding the subject of evictions and also due to general tensions between Jewish and Arab residents.

Tensions surrounding planned evictions of Arab families in the neighborhood quickly escalated last May and were exploited by Palestinian terrorist groups to launch rockets at Jerusalem on Jerusalem Day, sparking a nearly two-week-long conflict. It was yet another lesson that what goes on there has larger ramifications.

The latest incident that sparked this week’s clashes between Arabs and Jews in Sheikh Jarrah centered on the Yoshvayev family, a Jewish family living in the neighborhood. Their home was set on fire over the weekend – and their car has been torched nine times, allegedly by their Arab neighbors, horrific acts that apparently saw little to no assistance or involvement by the police.

Otzma Yehudit head MK Itamar Ben-Gvir has never been known for staying quiet. In an attempt to bring attention to the Yoshvayevs’ plight and demand police protection for the family, he set up shop on Saturday night in the family’s yard in what he called his “office.” 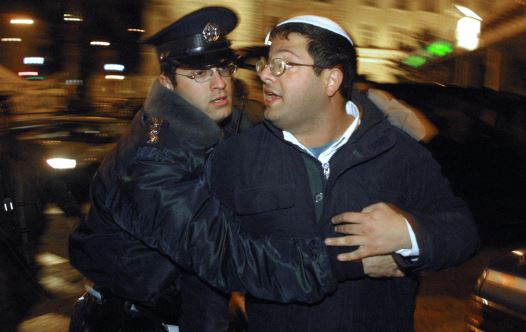 Ben-Gvir has been outspoken in his extremism and racism toward the Arab residents of Sheikh Jarrah and Israel in general. He is a known and avid supporter of Meir Kahane, ideological inspiration of the extreme right-wing terror group Lehava.

Just two months ago, Ben-Gvir pulled out a gun and threatened two Arab security guards at an event in Tel Aviv, claiming he felt “threatened” by them. “If you threaten me, I’ll take care of you,” he said, among other such threats, after repeatedly waving the gun around in a video that soon went viral.

He also set up an “office” in Sheikh Jarrah last May and was at the Jewish helm of clashes that took place during the dispute that launched Israel into Operation Guardians of the Wall.

So it’s no surprise that he showed up again on Saturday night, ostensibly to help the Yoshvayevs, but undoubtedly to raise the level of tension to boiling point.

Clashes between the right-wing Jewish activists and Arab-Israeli residents of Sheikh Jarrah have been ongoing since Ben-Gvir’s arrival in the neighborhood. Several people have been injured and have needed hospital treatment as stones and chairs were thrown every which way, with police finding little success in their efforts to quell the fighting, even with the use of “crowd-dispersal means” such as firing tear gas into the crowd.

Ben-Gvir was one of those evacuated to hospital on Monday after he was injured trying to stop the police from taking down his “office” and as if in extreme irony, media reports said that he was treated by two doctors: Dr. Muhammad Shaibat and Dr. Moatsam Shviki.

On Monday, Palestinian factions warned that the violence would cause the situation to explode and called on Palestinians to come to the neighborhood to clash with Jews. Hamas has said that the “aggression and playing with fire” that Israel has carried out will “explode in its face.”

Before the situation spirals further out of control, the government needs to step in and calm the situation and, for a start, order Ben-Gvir to leave Sheikh Jarrah.

Israel should not quiver at every threat terrorist organizations make, but this does not mean flying in the opposite direction and making intolerant comments while violence flares among Arab residents of Sheikh Jarrah.

While Ben-Gvir may be correct in saying that Israel should not accept any ultimatum from terrorists, creating tension on the ground doesn’t help.

What has happened to the Yoshvayev family is horrendous and should be condemned on all fronts. Beyond that, it is the responsibility of the police to actively prevent and bring to justice whoever set a single family’s car on fire a whopping nine times.

It is inexcusable to see that, once again, Israel’s first line of defense is seemingly helpless in the face of terror and hate crimes.

This does not, however, justify callous incitement and provocation from an MK intent on pouring gasoline on the flames.