Has Israeli TV lost all interest in Nazi-hunting?

From my personal experience of directing the Jerusalem office of the Simon Wiesenthal, the toughest “nut to crack,” has always been Israeli television.

Visitors seen standing next to a display of swastika banners at the Yad Vashem Holocaust Memorial museum in Jerusalem on April 26, 2022, ahead of Israeli Holocaust Remembrance Day.
(photo credit: OLIVIER FITOUSSI/FLASH90)
Advertisement

Practically every person who works in the field of Holocaust commemoration, research, education and activism is well-aware that there are only two weeks a year that the local media are truly interested in stories about various aspects of the Shoah. One is the week of Yom Hashoah, Israeli Holocaust Remembrance Day, observed on the 27th day of the month of Nissan in the Jewish calendar, six days after the end of Passover, which was chosen because it was a date during which the Warsaw Ghetto revolt took place.

The revolt started on April 19, 1943, which was the eve of Passover and lasted until approximately the 5th of Iyar, the day on which Israeli independence was declared five years later.

The second is the week of January 27, the anniversary of the liberation of the Auschwitz-Birkenau death camp in 1945, which was established as an international memorial day by the United Nations in 2005.

A heart-wrenching subject - that interests many

These two weeks are like a breath of fresh air for the many hundreds of people in numerous different countries all over the world, who have dedicated their lives to various aspects of the Holocaust, and toil many hours a week dealing with a very painful, sensitive, and in many cases heart-wrenching subject. It is only natural therefore for many such individuals to look forward to these dates, and plan in advance, how to maximize the media’s biannual interest in Holocaust-related stories and issues.

I am no exception in this regard. Twice a year, I try to make sure to write at least one or two op-eds on various aspects of our continuing efforts to maximize justice and our fight against Holocaust distortion, which are the two main issues that our office concentrates on. So, for example, I arrange the publication of the findings of our annual report on “Investigation and Prosecution of Nazi War Criminals,” to coincide with the two weeks in which media interest is at its highest level. 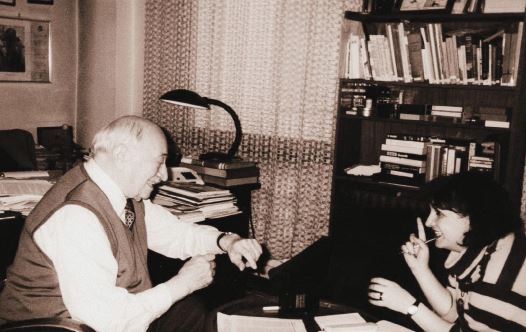 Needless to say, as the number of Holocaust perpetrators diminishes due to age, there was less and less interest in the trials, although the dramatic change in German prosecution policy instituted slightly more than a decade ago, whereby death camp guards could be convicted of “accessory to murder” based on service alone, did result in some increased interest.

From my personal experience of directing the Jerusalem office of the Simon Wiesenthal for the past 36 years, the toughest “nut to crack,” has always been Israeli television, especially the morning talk shows. Several times over the past years, I had been contacted and asked to appear, only to be told the night before, that horadnu et ha-aytem (we dropped the topic).

Thus, I was very pleasantly surprised when Adi, the producer of Channel 13’s morning show Ha-Olam ha-Boker, called me almost three weeks before Yom Hashoah, in order to ensure my participation in the program slated for that day.

Also encouraging, was the fact that Shay, the researcher for the show, spent a total of well over an hour on the phone with me the day before to collect as many details and anecdotes as he could on the most interesting and exciting cases of the Nazi criminals whom I had helped to bring to justice.

He also provided the “icing on the cake,” when he assured me that my slot on the program would be nine minutes long, a very respectable length. In other words, it would be well worth my while to get up at 5 a.m. in order to arrive in Tel-Aviv on time.

Unfortunately, that was nowhere near the case. Nine minutes? Not even close. What happened was that I was supposed to follow an interview with former Israeli Supreme Court President Aharon Barak, who at age eight was smuggled out of the Kovno Ghetto in Lithuania in a sack of potatoes.

As far as I could ascertain, the interview was supposed to last about 8-9 minutes, but ultimately was on the air for 15 minutes. This left only three minutes for my segment, which was unceremoniously ended by the 8:00 a.m. news, without my being able to relate almost any information of any value or interest.

Of course what should of happened, was that the interview should have continued after the news for at least 5-6 minutes, during which the audience could have received some valuable information. Judging from the stories of the guests who followed me on the program, which I heard discussed in the studio waiting room, none seemed to be of any unique or special significance.

Needless to say, at first I was personally very upset, but by a few hours later, it was obvious that to me that the problem had nothing to do with me, but rather was a far deeper problem, the lack of interest and concern in Israeli commercial television regarding the efforts to bring Nazis to justice. Or as I have often explained to foreign journalists, who were very surprised by the lack of interest in the subject by their Israeli TV colleagues, “In Israel, unless you’ve caught Mengele, you haven’t done anything.”

And in the same vein, I will never forget a comment by one of Israel’s top political TV journalists today, Amit Segal, when he was approached at the Demjanjuk trial in Munich in 2009 by two journalists from the French equivalent of 60 Minutes.

They had interviewed me in Jerusalem, accompanied me to the trial’s first session in Germany and asked Amit, “Why isn’t Zuroff famous in Israel?” He began to explain to them that the Holocaust is a very difficult subject, and so on, to which I replied, “Amit, I would have loved to bring Himmler to justice, but he committed suicide before I was born,” to which he replied quite pithily, “Ze lo tayrutz,” (That’s no excuse.)

The writer is director of the Simon Wiesenthal Center – Israel office and Eastern European Affairs, and coordinator of the center’s Nazi war crimes research worldwide.