My in-laws were lucky to have gotten out when they did. In December 1947, a Farhud-type pogrom swept Aleppo, leaving the community devastated.

This month 81 years ago, Bagdad’s Jews suffered a wave of murderous antisemitic violence known as the Farhud (onslaught). The pogrom was not only the beginning of the end for the Jews in Iraq, but emblematic of the destruction of Jewish communities across the greater Middle East – a Nakba (catastrophe) largely forgotten by the world

"If the United Nations decided to partition Palestine, they might be responsible for very grave disorders and for the massacre of a large number of Jews.”

Amid the flames of the Second World War, the Farhud erupted on June 1, 1941. The antisemitic mob violence led to the murder of 179 Jews, although the total number of Jewish fatalities could have been as high as 600, with many unidentified bodies buried in a mass grave. In addition, more than 1,000 Jews were injured, with around 900 homes destroyed and massive amounts of property looted.

The two days of terror occurred during the power vacuum between the collapse of the pro-German government of Rashid Ali and the return of British forces to Bagdad. The violence was incited with Axis support in radio broadcasts and newspapers, as well as sermons in mosques, all fueled by the potent fusion of fascism, Arab nationalism and Islamic militancy.

The leader of the Palestinian national movement, Amin al-Husseini, living in Iraq since 1939, played a crucial role in supporting the anti-British coup that brought Rashid Ali to power and in encouraging the deadly violence against Bagdad’s Jews. With Britain’s reconquest of Iraq, al-Husseini relocated to Berlin, where he served the Nazi regime until its demise. Notwithstanding this wartime collaboration, al-Husseini was elected president of the All-Palestine Government in 1948. 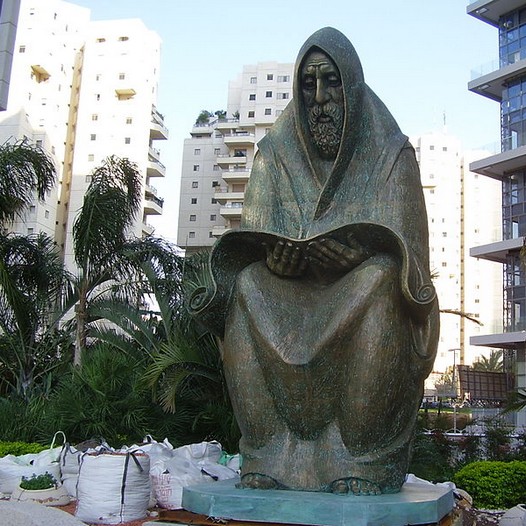 This Monument, ‘Prayer,’ in Ramat Gan, is in memory of the Jews who were killed in Iraq during the Farhud pogrom (1941) and in the 1960s. (credit: Wikimedia Commons)

Baghdad’s Jews have a rich heritage. Known as the first diaspora, the community predated the rise of Islam, tracing its roots back to the Babylonian exile of antiquity.

Over the centuries, the Jews of Mesopotamia made an immeasurable contribution to Jewish scholarship and civilization, as well as to the culture and society of the Middle East as a whole.

But the Farhud was not just a mortal blow to one historic community, it was a sign of things to come for Jews throughout the Arab world. From Libya to Syria and from Yemen to Tunisia, murderous pogroms became more and more ubiquitous. And in the aftermath of the Second World War, entire Jewish communities were decimated.

The eradication of these indigenous communities received official sanction. In 1947, the Political Committee of the Arab League drafted a law declaring all Jews in Arab countries “be considered members of the Jewish ‘minority state of Palestine’; that their bank accounts would be frozen and used to finance resistance to Zionist ambitions in Palestine; and that Jews believed to be active Zionists would be interned as political prisoners and their assets confiscated.”

At the United Nations, Egyptian delegate Heykal Pasha warned, “the proposed [partition] solution might endanger a million Jews living in the Moslem countries... If the United Nations decided to partition Palestine, they might be responsible for very grave disorders and for the massacre of a large number of Jews.”

Iraqi Foreign Minister Fadil Jamali went further, stating “Not only the uprising of the Arabs in Palestine is to be expected, but the masses in the Arab world cannot be restrained. The Arab-Jewish relationship in the Arab world will greatly deteriorate.”

Following the UN’s partition vote of 29 November 1947, some 850,000 Jews were forced to depart the Muslim Middle East – a figure that exceeds by 100,000 the recorded number of Arab refugees that exited the territory of the newly established Jewish state.

Yet, while the Palestinian narrative receives wide international acknowledgment, the experience of the Jewish refugees from Arab countries is scarcely a footnote. Maybe this is because the Jewish refugees were successfully absorbed in Israel and other countries, while for political reasons Palestinian refugees were denied resettlement in neighboring Arab countries, their refugee status deliberately perpetuated as a diplomatic weapon in the war against Israel.

Unfortunately, this self-defeating approach towards Palestinian refugees remains an orthodoxy. In April of this year, current UNRWA commissioner-general Phillipe Lazzarini proposed dealing with his agency’s ongoing financial crisis by “maximizing partnerships within the broader UN system.” Yet, despite the clear managerial logic in enlisting the help of additional UN bodies to support UNRWA’s humanitarian work, Lazzarini was attacked by the PLO for ignoring the “political dimensions.”

Perhaps because of Israel’s achievements in integrating consecutive waves of Jewish refugees, it is possible to forget that a huge proportion of Israeli citizens are either refugees themselves or the offspring thereof – my own children, being no exception, having three refugee grandparents.

Their paternal grandfather was liberated in Germany by the US Army’s 102nd infantry division, on April 13, 1945. He was taken to the displaced persons facility at Hillersleben, together with former concentration camp inmates and slave laborers. Shortly thereafter, Magdeburg was transferred to Soviet control and my father ultimately joined the stream of refugees westward.

During the 1940s, both my wife’s parents fled Aleppo. They were part of a flow of thousands of Syrian Jews who walked on foot to Mandatory Palestine, entering illegally in contravention of the British ban on the admission of Jewish refugees.

My in-laws were lucky to have gotten out when they did. In December 1947, a Farhud-type pogrom swept Aleppo, leaving the community devastated. 75 Jews were murdered, hundreds injured and more than 200 homes, shops and synagogues were destroyed.

The carnage in Aleppo was only a further manifestation of a dark streak in the history of the Arab national movement: an ethno-religious chauvinism that not only opposed the Jewish state but even rejects to the continued presence of Jewish minority communities within larger Arab-Muslim society.

Unlike the much-publicized Palestinian story of dispossession, the parallel experience of Jewish communities across the Middle East enjoys little traction in international discourse; an anomaly that demands amends by bestowing deserved recognition upon all Jews forced to flee an increasingly intolerant and inhospitable Arab world.

The writer, formerly an adviser to the prime minister, is the incoming chair of the Abba Eban Institute. Follow him at @AmbassadorMarkRegev on Facebook.