An Egalitarian Hanukkah: Israeli politics have room to improve - editorial

US Ambassador to Israel, Tom Nides, attended an egalitarian service at the Western Wall. What does that teach us?

United States Ambassador to Israel Tom Nides joined Reform Jews and other progressive movements on Tuesday night for a Hanukkah lighting ceremony at the egalitarian prayer plaza at the Western Wall known as Ezrat Yisrael.

This was an important demonstration of religious liberalism, showing the diversity and beauty of Israel, in which all types of Jews can come together to celebrate this beautiful holiday.

Hanukkah’s themes of light and freedom are being contested today throughout the wider Middle East, including at home in Israel. In Pakistan and Afghanistan, the Taliban have banned women from higher education, while the protests against the Islamic regime in Iran led by freedom-seeking women have made us all aware of the threat extremists pose to the democratic and liberal values we hold dear.

While the situation outside Israel is far worse, we cannot ignore the challenges we face closer to home. Defense Minister Benny Gantz was heckled when he went to the Western Wall on Tuesday night. This is a shame and an embarrassment. Gantz is one of Israel’s political leaders. He has helped guide the country through several difficult years helming the Defense Ministry, and earlier as IDF chief of staff. You don’t have to agree with his politics, but there is a minimum of respect that people – especially those who dedicated most of their life to the country – deserve.

Unfortunately, shortsighted people do not see this, and only see politics and express rage. This illustrates how we are currently astride a balancing act between being the country that we can be, and falling into partisan political battles that harm Jewish holy days as well as our sense of national public decency. 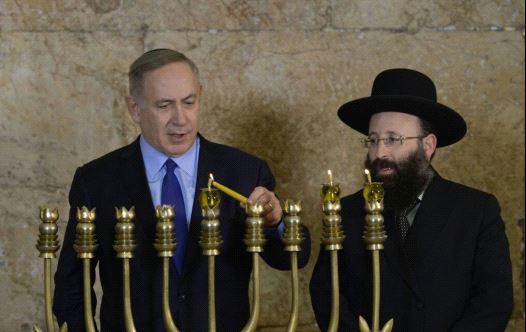 The egalitarian service was an important symbol of the struggles that non-Orthodox Jews have gone through to have a space of their own. For many years, this has been controversial, and in 2017 and under pressure from ultra-Orthodox politicians, Benjamin Netanyahu overturned a previous government decision to upgrade the plaza and to give the progressive Jewish movements quasi-state status.

This was an embarrassing moment for Israel which sent a message to the Jewish Diaspora that not all Jews are welcome to pray as they want at our faith’s holy sites.

A time to safeguard freedom

Hanukkah is a time to remember the need to safeguard these freedoms. The holiday provides us an excellent opportunity to discuss how freedom – and particularly freedom of worship – are key elements of the resilience of our state.

The attendance by the US ambassador was important as well. He was joined by Labor Party MK and Reform Rabbi Gilad Kariv. The outgoing government emphasized the kinds of inclusive values that the country should attempt to promote.

The incoming government has a chance to do the right thing and work toward coexistence at the Western Wall and other places. We hope it does because until now, the voices heard from the incoming coalition have been inciting against Reform and Conservative Jews, deepening a divide with the Diaspora and creating an unnecessary crisis.

It is understandable that the Western Wall, a holy site, will be a place where there are some religious tensions. The threat of internal strife, turning areas like the Wall into a place where Jews fight over space and where leaders are heckled, is an ever-present danger.

Israel faces hurdles in the coming years. We have the Iranian threat that continues to destabilize the region. In addition, the recent pandemic has caused significant economic problems. Inflation and the rise in mortgage payments are hitting people hard, as are rising crime and gun violence, which continue to claim innocent lives.

To overcome the challenges, we should learn from the egalitarian service at the Western Wall and seek to make amends between different types of Jews. We need to remember that Israel must be a place of peace and religious freedom.