Jerusalem today is whole, and it is beautiful. It has blossomed from the backwater town that it had become to a beautiful and thriving capital city.

It is about time for us to change our clocks and “fall back” to the new time. However, Joe Biden would do well not to turn back the clock diplomatically and cause a historic wrong.

On November 23, 2016, my article titled, “Mr. Trump take down this affront” was published in The Jerusalem Post. It depicted what was at that time an unacceptable situation in Jerusalem, the capital of the sovereign State of Israel. It detailed the travesty of a consulate that catered to the propaganda needs of a non-state, within the capital of a strong ally of the United States.

“It is also an affront to the sensitivities of Americans and their expressed desire through their representatives in Washington to respect the fact that Jerusalem is the capital of the State of Israel,” I wrote. “Just look at the consulate’s website. Even the address contains “jru” – https://jru.usconsulate.gov/ – but no hint of the host country, Israel, as if Jerusalem were an independent country.”

Today, in 2021, we can proudly say that the previous US administration heeded the call of so many and went well beyond our 2016 expectations. The status of Jerusalem has been corrected. The embassy, in Jerusalem, is a beautiful testament to the friendship of the United States and Israel. What was once an alien consulate entity in the heart of a country closely allied to the United States has become one that truly represents the United States to all the citizens of Israel.

There is now talk of the Biden administration looking to set back the clock and undo what was done. Rumor has it that the State Department will put a foreign consulate of a non-state in Jerusalem, looking back toward the 1948-1967 east-west designation that artificially ripped the city apart for 19 years. They would do well to not embarrass the alliance and friendship of the two countries by attacking this ancient capital city of Israel in this way. Those 19 years were not the model of peace and harmony for all peoples and faiths that Jerusalem strives to be. 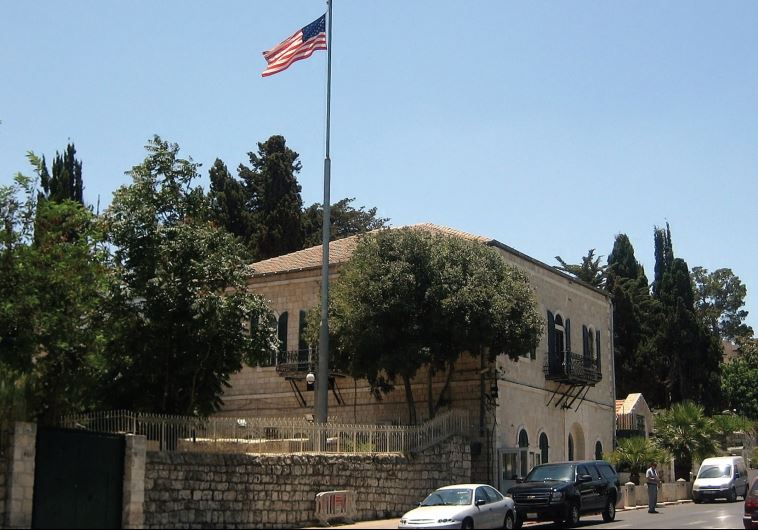 The US Consulate, on Jerusalem’s Agron Street (credit: Wikimedia Commons)

They would do well to look at American history. The British did not see the United States as a truly independent and unified entity. The burning of Washington City by the British during the Chesapeake Campaign of the War of 1812 was the culmination of this wrong-headed arrogance. Washington City was not a major city nor was it steeped in history – until that point. It was and is the capital of the United States of America. Soon thereafter, part of the country decided to put their capital city in the new Confederacy of the South. A bloody civil war was fought for the unity of the country. Artificial divisions can destroy peace, not build it.

Until 1948 there was no east or west designation of Jerusalem. King David moved his capital from Hebron to Jerusalem and it remained the capital of the Land of Israel and then of Judea. Thereafter, it was part of a province within the powers and empires of the day. Diminished, but not divided.

On May 28, 1948, the Jewish Quarter was captured by the Jordanians. They exiled the Jews of the Jewish Quarter and destroyed its synagogues. They tried to starve Jerusalem with a terrible siege. The objective was all of the city. Jerusalem was then bitterly divided for 19 years. That is the full extent of the east-west designation: 19 years out of thousands of years of city history.

June 5, 1967, when the Jordanians opened fire along the entire ceasefire line, the battle for the city was on. Two days later, the order was given to fully reunite the city. The blue and white flag of the State of Israel was hoisted over the Western Wall – a remnant of the holy Jewish Temples.

In reuniting the city, Israel wanted to maintain its character for all faiths. The government went so far as to hand the keys to the Temple Mount back to the Jordanian authority, although it is the holiest place on earth to the Jewish people.

Jerusalem today is whole, and it is beautiful. It has blossomed from the backwater town that it had become to a beautiful and thriving capital city. It has grown so much that it makes pre-1948 Jerusalem appear to be a small town, a shadow of what it once was and now is.

All are welcome to our beautiful city. But do not divide and sow discord. Do not show disrespect to your friends and allies. Build up the good and do not break what is not broken. It is too easy to do harm in this volatile area.

American presidents do historic good when they reunite and heal, as was done in Berlin. Mr. Biden, keep that wall down. Do not fracture and divide our city. Do not turn back the clock to the wrong time.

The author has served in several capacities in building Israel-US trade relations, including that of trade commissioner/director of trade for the government of Israel to the United States. He currently lives in Jerusalem.