Three supersonic asteroids to pass by Earth Sunday - Do we have to worry?

The three asteroids are each flying at several times the speed of sound and one of them, asteroid 2005 RX3, may be near in height to the Golden Gate Bridge. However, NASA says they won't hit.

An asteroid is seen passing by the Earth in a flyby (Illustrative).
(photo credit: PIXABAY)
Advertisement

Two supersonic asteroids, one of which was at minimum the size of the Statue of Liberty, have just passed the Earth Sunday, September 18, with a third set to follow later in the day, according to NASA's asteroid tracker.

The three asteroids in question have been designated 2005 RX3, 2022 SB and 2022 QB37, according to the Center for Near-Earth Object Studies (CNEOS) at NASA's Jet Propulsion Laboratory (JPL). The first asteroid is considerably larger than the others, with a maximum estimated size of 210 meters. The first two, which have already passed, also flew at far higher speeds than the third.

Asteroid 2005 RX3 is considerably larger than the other two and has an estimated width ranging from 92 meters to 210 meters.

To put that in perspective, at its smallest estimated size, asteroid 2005 RX3 is around the size of the Statue of Liberty. 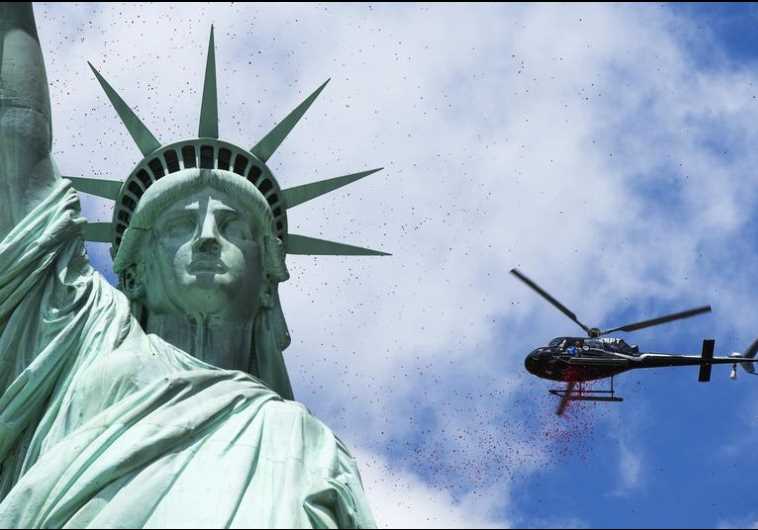 A helicopter flies above the Statue of Liberty in New York Harbor (credit: REUTERS)

But at maximum, this asteroid is much larger and is close in size to the height of the Golden Gate Bridge in San Francisco, California.

Asteroid 2005 RX3 is also a fast asteroid, with NASA reporting it barreling away at a speed of around 17.46 kilometers per second. That's around 62,856 kilometers per hour or almost 51 times the speed of sound.

The next asteroid was designated asteroid 2022 SB and is much smaller, with an estimated diameter ranging from just 8.5 meters to 19 meters.

For context, 19 meters is about the length of a bowling lane.

However, what asteroid 2022 SB lacked in size, it more than made up for in speed, flying around a whopping 17.89 kilometers per second. That's around 64,404 kilometers per hour or over 52 times the speed of sound.

This means that this small asteroid was flying around 30 times faster than an F-16 fighter jet.

The last asteroid, which has yet to pass Earth and is still heading this way, is a bit larger, but is also considerably slower.

This asteroid is also much slower, clocking in at a more modest 9.22 kilometers per second. However, though this is slower than its predecessors, it is still nothing to scoff at, being equal to 33,192 kilometers per hour or just shy of 27 times the speed of sound. It's also around 10 times as fast as a rifle bullet.

Considering two of these asteroids have already passed the Earth at the time of writing, it is clear that they won't pose any issues. Further, according to NASA's calculations, even the third one, asteroid 2022 QB37, will safely pass us by.

All three asteroids were also predicted to pass by the Earth at a considerable distance.

Out of all of them, asteroid 2022 SB was set to pass the closest to the planet at around 1.16 million kilometers way. However, while relatively close on a cosmic scale, it's still considerably far away, much farther than the estimated 384,000 kilometers away from the Earth that the Moon orbits.

But this is for the best. After all, while asteroid 2022 SB wouldn't do much damage, if any, in an impact scenario, the same can't be said for the others, especially asteroid 2005 RX3.

But an even larger asteroid over 300 meters in diameter, something like the Apophis asteroid, would be strong enough to devastate an entire continent. An asteroid that is over a kilometer wide – like asteroid 138971 (2001 CB21), which flew past the Earth in early March 2022 – could trigger a worldwide cataclysm.

And at a maximum estimated diameter of 210 meters, asteroid 2005 RX3 is certainly large enough to cause a major disaster if it impacted the planet.

But will an asteroid ever impact the Earth in 2022? The answer is certainly yes. Or rather, yes, it already happened.

Back in mid-March 2022, asteroid 2022 EB5, a small asteroid around half the size of a giraffe, actually struck the Earth. However, because it was so small, it didn't cause any damage.

Thankfully, not for a very long time, at best. In fact, NASA has already concluded that there is zero risk of a catastrophic asteroid impact on Earth for the next century.

This mosaic of the asteroid Bennu was created using observations made by NASA’s OSIRIS-REx spacecraft that was in close proximity to the asteroid for over two years. (credit: NASA/Goddard/University of Arizona)
What might be the next asteroid to hit Earth?

There are some possible candidates.

Currently, one asteroid recognized by NASA as being one of the most dangerous asteroids is the 500-meter-wide asteroid Bennu. If this massive asteroid ever impacts the Earth, the result would likely be catastrophic - but as far as NASA is aware, this won't be for a long time, if ever.

It's a strong possibility, particularly with the field of asteroid deflecting.

The field of planetary defense is specifically organized to find ways of keeping the Earth safe from asteroids and scientists at NASA and across the world are hard at work trying to do just that.

Currently, the most promising of these efforts is NASA's Double Asteroid Redirection Test (DART) mission, which will see a small specially-designed spacecraft slam into an asteroid to see if it can possibly alter its orbit ever so slightly, which is what asteroid deflection is. But time will tell if this will prove effective.

The DART Mission is set to reach its target, the asteroid Dimorphous in the Didymous system, on September 26.