A new species of owl was found in Africa, and it's hauntingly beautiful

The species was discovered by scientists in 2016, but suspicions of its existence gained traction from 1998, and testimonies from local people suggest its existence could be traced back to 1928.

A new species of owl has been identified in Príncipe Island, part of the Democratic Republic of São Tomé and Príncipe in Central Africa. The bird is now officially known as the Principe Scops-Owl, or Otus bikegila.

The new owl species was described in a peer-reviewed study in the open-access journal ZooKeys based on multiple lines of evidence such as morphology, plumage colour and pattern, vocalizations and genetics.

The data was gathered and processed by an international team at the University of Porto's Research Centre in Biodiversity and Genetic Resources (CIBIO) led by Martim Melo (also at the university's Natural History and Science Museum), Bárbara Freitas (also at  the Spanish National Museum of Natural Sciences) and Angelica Crottini.

This species was initially discovered by scientists in 2016, although suspicions of its occurrence gained traction from 1998, and testimonies from local populations suggests its existence could be traced all the way back to 1928.

“Although it may seem odd for a bird species to remain undiscovered for science for so long on such a small island, this is by no means an isolated case when it comes to owls,” the researchers state. “For example, the Anjouan Scops-Owl was rediscovered in 1992, 106 years after its last observation, on Anjouan Island (also known as Ndzuani) in the Comoro Archipelago, and the Flores Scops-Owl was rediscovered in 1994, 98 years after the previous report.”

“Although it may seem odd for a bird species to remain undiscovered for science for so long on such a small island, this is by no means an isolated case when it comes to owls.” 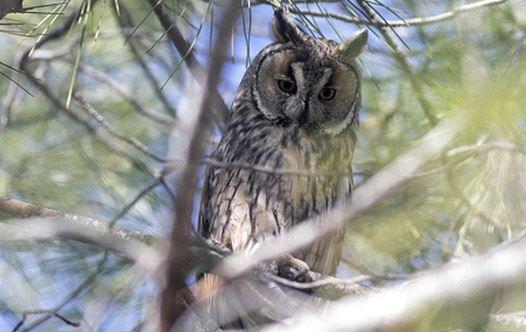 The scientists behind the discovery explained that the species epithet “bikegila” was chosen in homage of Ceciliano do Bom Jesus, nicknamed Bikegila - a former parrot harvester from Príncipe Island and now a ranger of its natural park.

“The discovery of the Principe Scops-Owl was only possible thanks to the local knowledge shared by Bikegila and by his unflinching efforts to solve this long-time mystery,” the researchers said. “As such, the name is also meant as an acknowledgment to all locally-based field assistants who are crucial in advancing the knowledge on the biodiversity of the world.”

The old-growth native forest of Príncipe

The newly-discovered species is found at low elevations of the old-growth native forest of Príncipe, currently restricted to the south of the island but fully included within Príncipe Obô Natural Park. The entire Principe Island was extensively surveyed to determine the distribution and population size of the new species, which is estimated at around 1000-1500 individuals.

This is the eighth known species of bird endemic to Príncipe, further highlighting the unusually high level of bird endemism for this island of only 139 sq. km.

In the wild, the easiest way to recognize the new species in the field was by its unique call - in fact, it was one of the main clues leading to its discovery. The call is, curiously, most similar to a distantly related Otus species, the Sokoke Scops-Owl O. ireneae.

“Otus bikegila's unique call is a short "tuu" note repeated at a fast rate of about one note per second, reminiscent of insect calls. It is often emitted in duets, almost as soon as the night has fallen," Melo explains.

“The discovery of a new bird species is always an occasion to celebrate and an opportunity to reach out to the general public on the subject of biodiversity,” says Melo. “In this age of human-driven extinction, a major global effort should be undertaken to document what may soon not be anymore,” he and his team state in their paper.