The IDF has been able to handle terror groups like Hamas, but lone wolves are a threat they have yet to conquer.

PALESTINIANS BURN tires in a demonstration during the First Intifada in Ramallah in 1988
(photo credit: GPO)
Advertisement

Thirty-four years after the First Intifada broke out with Palestinian youth at the forefront of the fight against Israeli troops, Palestinian youths have not stopped trying to attack Israeli soldiers and civilians.

On Wednesday morning, a 14-year-old Palestinian girl stabbed a 26-year-old Israeli woman who was walking with her children in the east Jerusalem neighborhood of Sheikh Jarrah. The victim was rushed to a hospital with stab wounds in her back.

About an hour after the attack, the minor was arrested at the al-Ruda girl’s school.

The attack carried out by a teenage girl, whose family is one of several Palestinian families facing eviction from their homes in Sheikh Jarrah, was the sixth attack in or around Jerusalem in the past month.

Though she is not affiliated with any terrorist group, Hamas praised the attack and pointed to it as the continuation of the First Intifada that broke out on the same day 34 years ago. 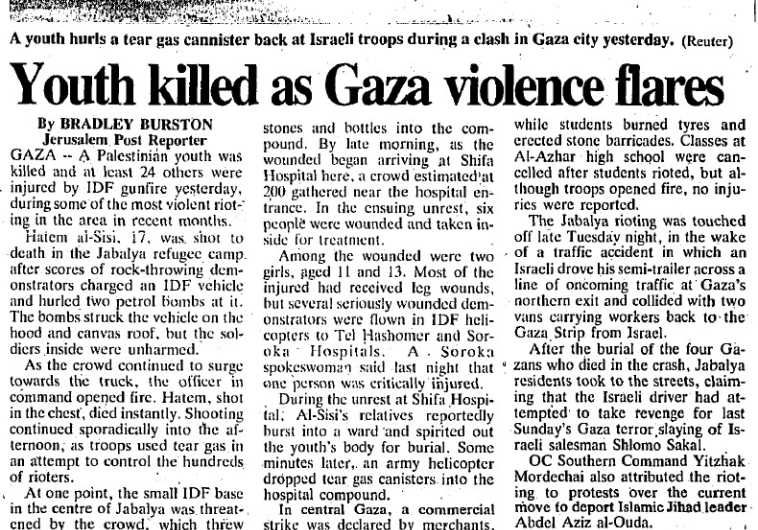 On December 8, 1987, an Israeli military truck plowed into a line of Palestinian cars returning from a day’s work in Israel, four people were killed.

As thousands of Palestinians poured into the streets for the funeral of the victims, IDF troops in the Jabalya refugee camp were confronted with a hail of stones, bricks and bottles thrown by teenage boys. In the first 10 days of the violence, 27 protesters were killed and 250 were injured.

The “stone intifada” spread across the Gaza Strip, West Bank and Israel, and by the time it was over, six years later, some 1,900 Palestinians had been killed, including 241 minors. Some 277 Israelis were killed during the six years of violence.

With the signing of the Oslo Accords, the violence waned. But seven years later, the Second Intifada broke out.

The Second Intifada, from September 2000 to mid-2005, saw close to 1,000 Israelis killed and thousands more wounded, as hundreds of Palestinian terrorists staged deadly attacks, including suicide bombings, across the country.

At the time, Ariel Sharon was prime minister, Binyamin Ben-Eliezer was the defense minister and Shaul Mofaz was IDF chief of staff. The government’s reaction to the deadly attacks, which ranged from financial sanctions, prohibiting Palestinians from entering Israel and targeted assassinations, did not seem to have any real impact on the relentless and deadly attacks.

There is no set date or event for when the Second Intifada ended, with some saying the unilateral disengagement from the Gaza Strip was the “end date” while others say that the death of Yasser Arafat led Palestinians to stop the violence.

Ten years later, the 2015 “stabbing intifada” began with Palestinians – mainly youth – stabbing, running over and shooting Israeli soldiers, civilians and even tourists in a wave of violence in the West Bank and Israel. There were almost daily attacks in the winter of 2015-16 before the violence decreased.

There have been sporadic waves of violence since, and most of the attacks were carried out by lone-wolf Palestinian youths.

Unlike during the first two intifadas, the challenges that the army faces during the current wave of violence in the West Bank and Israel are completely different.

The Palestinians who were involved in the violence during the first and second intifadas were much older than the average attacker whom the army currently faces. The IDF’s intelligence-gathering capabilities have also increased dramatically since the prior two intifadas.

Another change that’s less apparent but just as important is the increased communication between the two sides which did not exist before.

But while the IDF does not consider the recent attacks as a significant rise in violence, or another “wave” of attacks, the military must admit that the lone-wolf attacker is a threat that they have yet to control.