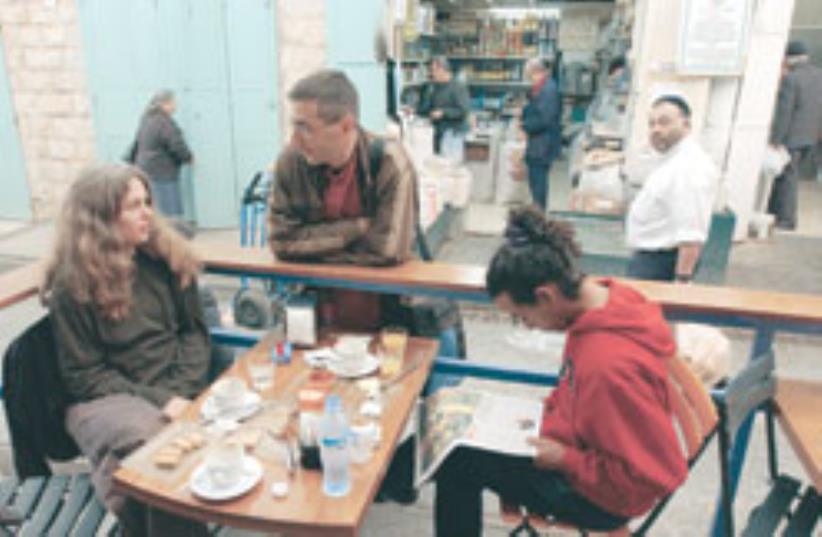 One in three restaurants is in danger of immediate
(photo credit: Ariel Jerozolimski)
Advertisement
Industry, Trade and Labor Minister BinyaminBen-Eliezer on Wednesday urged the government to prepare emergencymeasures to help exporters, avert further layoffs as the value of theshekel vis-a-vis the dollar continues to rise.
"On Sunday I will raise the issue to the cabinetto call the government to prepare emergency steps in case thedepreciation of the dollar continues much further. I am aware thatalternative solutions for intervention, should they become necessary,are problematic, but we should be prepared for the worst," saidBen-Eliezer. "At the same time my ministry will suggest a basket ofimmediate solutions mainly to reduce exporters costs."
Since April, when the dollar exchange rate stood at NIS 4.26,the greenback has continued to fall, dropping below NIS 3.80 this week.
The appeal came after Ben-Eliezer on Wednesday convened anemergency meeting with senior officials at the ministry's office,including Boaz Hirsch, head of foreign trade, Hezi Zeig, head of theInvestment Center, Benny Pfefferman, head of the economic researchdivision and Mordechai Shmuel, head of the diamond division.
In the first five months of the year, exports ofgoods plunged 32 percent and industrial exports dropped 34%. Industrialexports not including diamonds fell 26%.
"The problem starts and ends with jobs," said Ben-Eliezer. "Myconcern is that exporters forced to bring costs down will cut jobs."
Economists at business information company Dun& Bradstreet Israel said Wednesday that most recent data on therisk-level of the business sector found that since the beginning of theeconomic crisis, almost all of the hi-tech companies reduced headcount, leading to 7,000 lay-offs in the industry.
"One of the main export sectors and growth engines of theeconomy, the hi-tech sector is getting hit twice," said D&B Israeleconomists. "The global downturn in demand is hurting export volumesand the devaluation of the dollar is damaging revenues from exports.There is still a real threat to the survival of some of the exportersin the economy and top of the list are hi-tech exporters."
One in three restaurants and pubs is in danger of immediateclosure, dampening prospects of a recovery in the near future,following positive economic data, D&B Israel said in the report.
"We are possibly past the panic this crisis has created, but itis too early to talk about a recovery in the economy when 65,000businesses are still under threat of closure," said Reuven Kovent, CEOof D&B Israel.
He added that data from the first six months of the year showedthat the restaurant and pub sector was the riskiest in Israel, as 29%of the businesses were in danger of immediate closure. Food shops arein second place, as 26.7% are under threat of immediate closure. Asfood businesses are struggling for financial survival, only one inthree deals is being paid for on time, according to the survey.
The D&B Israel figures on the average business risk levelin the economy as a whole showed a modest slowdown in the proportion ofbusinesses at very high risk, which stood at 14.2%, compared with 15%at the beginning of the year.
"However, today the percentage of high-risk businesses is stillhigh compared with the 12.8% in the same period last year," saidD&B Israel economists.
Kovent added that starting with the outbreak of the crisis lastyear, until the first quarter of 2009, the majority of companiesswitched to crisis management and to work force reduction encompassingall areas.
"Since May we are seeing a slow 'release of budgets.' The datawe are presenting do not point to a change in the trend at thismoment," said Kovent. "What we are seeing is a move away from 'crisispanic' to more rational management."
Advertisement
Subscribe for our daily newsletter