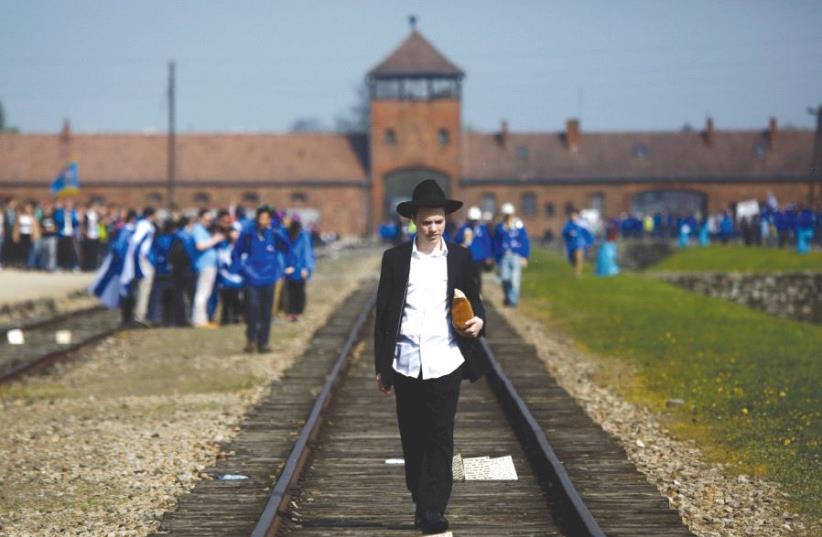 A man walks on the railway tracks in the former Nazi death camp of Auschwitz-Birkenau
(photo credit: REUTERS)
Advertisement
The Simon Wiesenthal Center is considering issuing a travel advisory for Jews who want to visit Poland.This follows reports of increased antisemitism in the country after a controversial Holocaust law was passed earlier this month.“A travel advisory would urge Jews to limit their travel to Poland only to visit ancestral graves and Holocaust-era death camps,” Rabbi Marvin Hier, dean and founder of the center, and Rabbi Abraham Cooper, associate dean and director of the center’s Global Social Action Agenda announced on Thursday. “We would take such action with great reluctance. We are not enemies of Poland. Our center has brought hundreds of Jewish and non-Jewish leaders on dozens of missions over the past four decades... But in 2018, we fear for a Poland that has now seen the history of the Holocaust recast by political forces who seek to bury the ugly past that includes the murder of Jews by Poles during the Holocaust and in the immediate aftermath of WWII,” they said.Poland’s nationalist ruling party Law and Justice, argues that the law is necessary to ensure that Poles are also recognized as victims and not perpetrators of Nazi aggression.As well as sparking international criticism, the law, which criminalizes suggestions of Polish complicity in Nazi actions during World War II, has had a direct impact on Poland’s Jewish community.Earlier this week, the Union of Jewish Communities in Poland published a letter signed by dozens of Polish Jewish representatives that said hate speech had spread from the confines of the Internet to the public sphere and they do not feel safe in Poland.The Simon Wiesenthal Center said it will closely monitor the situation over the coming weeks and months and will act accordingly.