IDF forces entered the Palestinian village and safely rescued the Israeli civilian and her son.

A Jewish woman who was reportedly attempting to flee her Palestinian husband but could not escape the Palestinian village she was living in was rescued by IDF soldiers on Monday, according to the IDF and the far-right Lehava organization.

"There was a very complex rescue mission by the army."

Most of the details of the incident cannot be published, but the Lehava organization stated that it involved a woman who had been in contact with the organization "for some time," according to Arutz Sheva.

"The family contacted the army and said that now is the time that it is possible to get her out," said Lehava Chairman Benzti Gopstein. "There was a very complex rescue mission by the army."

The woman was being held in a village in the Palestinian Authority without the ability to escape. She contacted Lehava who advised her to request help from the IDF.

"The woman cried for help," Gopstein said, according to Arutz Sheva. "It was a complex and complicated rescue because her family objected to her leaving. The Palestinian father is now fighting for the child." 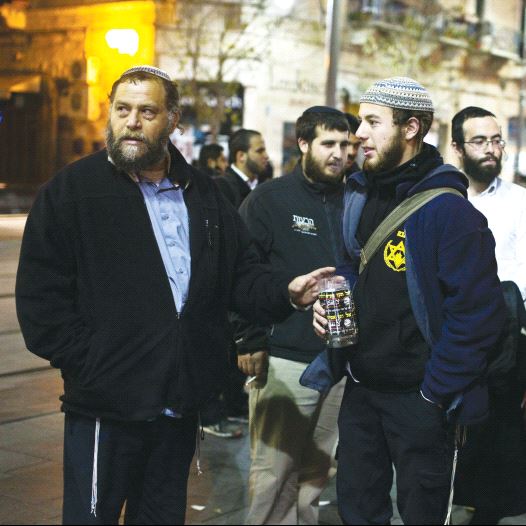 Ben-Zion Gopstein (left), leader of the group Lehava, gathers with some of his young followers in Jerusalem in 2014 (credit: REUTERS)

The woman and her child are staying in a shelter apartment belonging to Lehava.

Channel 14 reported that the woman had married a Palestinian and was trying to escape after he threatened her life.

Religious Zionist Party head Bezalel Smotrich tweeted details about the incident on Tuesday morning, but later deleted the tweet and replaced it with one asking people to pray due to an "ongoing dramatic incident involving protecting a life."

Smotrich later updated with a second tweet saying "I did not mean to stress people out. It was not a terrorist attack, God forbid, but an event of saving lives that requires prayers...Just say a psalm." A few hours later, the MK published a tweet thanking the IDF and Lehava, as well as all those who offered prayers.

"Earlier today, a report was received about an Israeli citizen who is in distress in the village of Kablan in the Samaria Regional Brigade. IDF forces entered the village and safely rescued the civilian and her son," said the IDF. "There are no casualties to our forces."