Movers and shakers in Israeli society 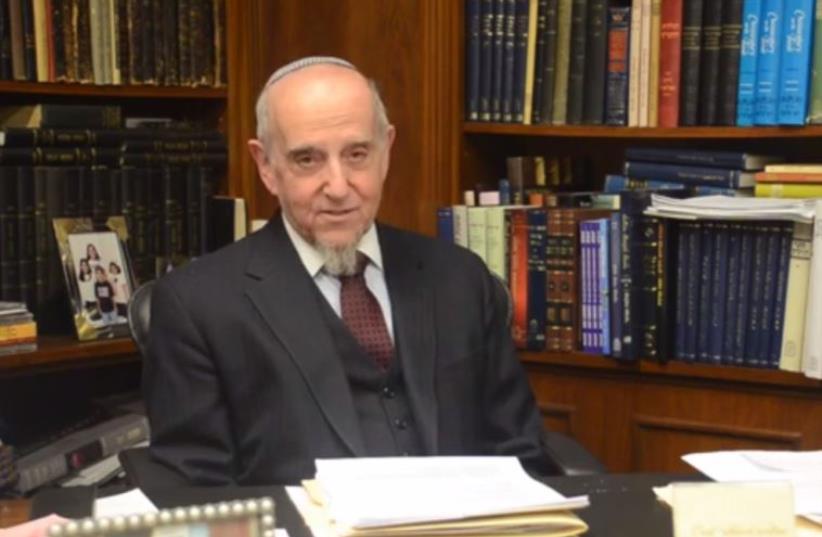 Lookstein likes to come to Israel each year on at least one of the pilgrimage festivals, and when he is in Israel, he is invariably invited to lead the Shabbat Mussaf service at the Hazvi Yisrael Synagogue in Talbiyeh. At age 90, his back is still ramrod straight, and his voice loud, clear and stirring. Unlike many younger men, he does not rush through the prayers like an express train but recites them in a sincere and meaningful manner at a pace that anyone could follow.

After 55 years in the Kehilath Jeshurun pulpit, he is well aware of the fact that there are congregants who don’t read Hebrew well and who find it impossible to follow a fast reader. Lookstein makes it easy for such people to follow him. He is acutely conscious of the fact that the Hebrew term shaliah tzibur means emissary of the public. In representing them before the Divine Creator, he remains cognizant that he is also representing people whose Hebrew comprehension and reading skills are lacking, and for them he has to put much more meaning into the prayers – something that he does admirably, as he proved yet again this past Shabbat.

■ TRADITIONALLY, TEENAGE years are often rebellious. During their teens, many young people take out their grievances against their parents and society, defy the rules and experiment with sex, drugs and alcohol.

But there are also those who have an innate sense of social responsibility. Among them are 14-year-old Maor Wolf and his friend Beni Spier, who have established an organization that in Hebrew is called She’rak Tehayech and translates into English as “You should only smile.” The two boys, who have already gotten together other teens under the age of 20 to join them, met this week with Health Minister Nitzan Horowitz to discuss their planned activities, which include lectures in various social environments throughout Jerusalem, monthly social meetings in various places to enable young people to meet and network with one another, discussions on mental health in an effort to persuade their peer group that there is nothing to be ashamed of in mental illness, and the best way to deal with it is to seek professional help. They will also host discussions on what it means to live in an ever-changing environment.

The Hillel-King George store that refuses to leave

■ THOUGH THE number of vacant shops in the Hillel Street-King George Avenue area keeps increasing, one of the veteran stalwarts on the corner where the two streets intersect, Frenkel Luxury Tailoring, shows no signs of leaving, and in fact some years ago added money changing to its tailoring enterprise.

Over the past few weeks, the store window has been graced by a large poster featuring the faces of political party leaders Benjamin Netanyahu, Moshe Gafni and Yair Lapid, all covered by a large red X. Above their heads is a heart, inside of which is a very well-dressed man. The headline reads: “Only in one of our suits is it possible to win.” As is so frequently stated, in Israel everything is politics, and there’s politics in everything.

When protests go to far

■ RECENTLY, THIS column lauded real estate developer Laurent Levy for covering the enclosure around his Le Grande Hotel project on Jaffa Road with blown-up copies of photographs of downtown Jerusalem in the 1920s and 1930s. In the interim, someone defaced all the women in the photographs. Happily, that situation was remedied, either by replacement or by washing off the black ink that blotted out the faces, but in one photo there are two women whose faces are still blacked out.

But that’s not the only perversity in relation to this project. The enclosure itself is white, and on it, on one section, is a row of male figures who, by their attire, illustrate the different human elements who lived in Jerusalem a century ago. However, we are in a protest era in which women are asserting their rights, and this truly attractive section of the enclosure was violated by someone writing in large, crude blue letters the chant that has been taken up in Iran following the death of Mahsa Amini, who was arrested for not properly wearing a hijab, thus leaving part of her hair uncovered.

Amini has become the symbol for women repressed by religious traditions to take up the cry for freedom. That’s something that most women would adhere to, but it loses its purpose when an aesthetic structure is violated by a feminist slogan. Promoting the cause can be just as effective without being destructive.

■ ON THE day prior to the upcoming Knesset elections, President Isaac Herzog, in conjunction with the Israel Academy of Sciences and Humanities, which is next door to his official residence, will host a symposium on science and religion and the impact of human genome research on all our lives. Participants will discuss both the benefits and the dangers of man playing God. The symposium is the first in a series.

The Einstein Museum is coming

■ THE ANNOUNCEMENT on Sunday that the government has finally given its approval to the construction of the Albert Einstein Museum on the Hebrew University’s Lily and Edmond Safra Campus in Jerusalem’s Givat Ram is long overdue. The subject has been under discussion for more than a decade.

Einstein, who was one of the founders of the Hebrew University and was offered the presidency of the State of Israel following the death of Israel’s first president, Chaim Weizmann, has been memorialized elsewhere in Israel. It is no coincidence that the square leading to the Israel Academy of Sciences and Humanities is known as Einstein Square.

Needless to say, the person happiest about the decision is Prof. Hanoch Gutfreund, 87, an internationally renowned physicist and emeritus president of the Hebrew University, who has long been the director of the university’s Einstein Center and has promoted it in Israel and abroad.

In the various media reports about the Einstein Museum at the Hebrew University, it has been stated that a multimillion-dollar building will be constructed.

Would it not be easier, faster and less expensive to convert the soon to be vacated National Library, which is moving from the Safra campus to closer proximity to the Knesset? Additional floors can be built onto the existing building, which is at the far end of the campus. If this would be done, it would also cause less discomfort and disruption to students and faculty staff.