Husband in question has refused to give a divorce for 17 years and has sat in jail for most of that time. 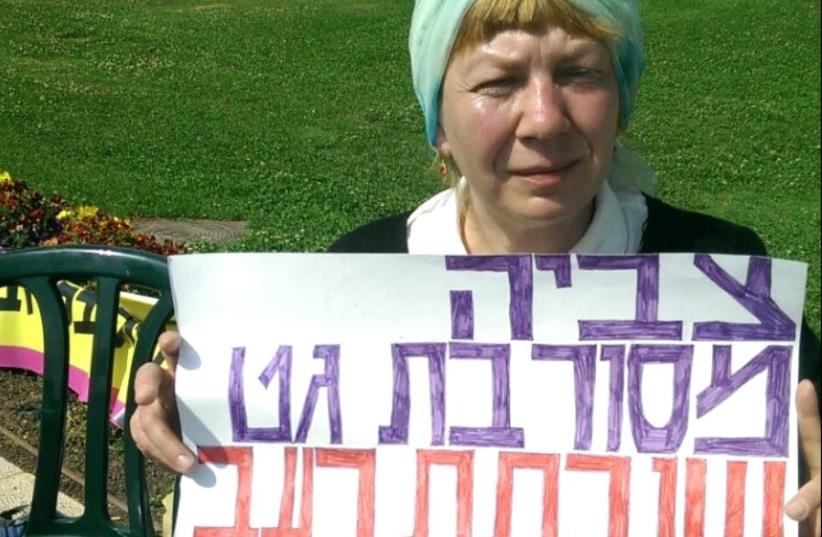 Tzviya Gordetski.
(photo credit: OFFICE OF MK YAEL COHEN PARAN)
Advertisement
For the first time in Israel, a man who has refused to give his wife a religious divorce (for 17 years) faces criminal charges, after the Jerusalem Rabbinical Court decided to refer his case to the State Attorney’s Office.Perhaps even more significant for the wife, the rabbinical judges are now likely to start reviewing the husband’s medical and psychological history, to check if he concealed psychological problems before they were married.If they were to find sufficient grounds to determine that he had hidden such conditions, the marriage could be annulled on the basis of a precept in Jewish law which determines that had the spouse known about the hidden issue she would not have consented to marry in the first place.Tzvia Gordetski, 53, was married to her husband for nine years and had four children with him before requesting a get (religious divorce) due to his violent behavior toward her.In the year 2000, the Jerusalem Rabbinical Court ordered the husband to give a bill of divorce to his wife, issuing what is called a “divorce by compulsion” ruling.The husband has however refused to grant the divorce, despite the fact that he was sent to prison by the court not long after the ruling and has sat there for almost 17 years.Rabbinical court sanctions operate within the framework of civil law, which in general allows for easier prison conditions than for prisoners held under criminal law.But in November last year, State Attorney Shai Nitzan published a regulation allowing for the criminal prosecution of men or women who refuse to grant or accept a divorce after being instructed to do so by a rabbinical court in a “divorce by compulsion” ruling.The full force of criminal sanctions will now be available against Gordetski’s husband, including a sentence which, if the husband is convicted, would leave him in prison even if he eventually gives a divorce.Shay Zilberberg, a layer from the Rackman Center women’s rights group, explained that the threat of even longer jail time might help convince the husband to give a divorce before he is criminally convicted.Zilberberg said however that he did not believe that the husband, whom he has encountered in the rabbinical court hearings, will ever voluntarily give a divorce, saying he is not in the right frame of mind to do so anymore.It will also be difficult to further harden the husband’s prison conditions, since most of his rights as a prisoner under civil law have already been revoked.Zilberberg added that it would be also difficult to prove that the husband had hidden psychological conditions before the two married, given the length of time since the marriage and the fact that relevant medical documents may not be available or even exist.He said however that the Jerusalem Rabbinical Court’s decision to request criminal proceedings against a divorce refuser was an important step in creating greater deterrence for other potential divorce refusers in the future.The rabbinical judges were harshly critical of the husband, describing his behavior as “severe and ongoing abuse.”The judges also issued a call to the Knesset to pass legislation allowing the implementation of a tool within Jewish law, whereby a rabbinical court can order that a divorce refuser be physically beaten until he agrees to grant a divorce.Despite their call, it is highly unlikely that the Knesset would ever pass such legislation.