Wine Talk: A Master of Wine, Food and Words

MASTER OF WINE Jancis Robinson has won every award under the sun, but maintains the ability to look beginners in the eye and come down to their level.
(photo credit: Courtesy)
Advertisement
Master of Wine Jancis Robinson visited Israel recently. Wine is a business where respected critics can transcend the stars of the trade and become superstars, and Robinson is in that category. We waited a long time for the visit and it was spoken about in hushed tones.

Robinson is a wine critic whose respect among consumers more than matches that of Robert Parker. She is also a gifted wine writer who paints the tapestry of the wine world with the artistry of Hugh Johnson and she is a communicator par excellence who long ago was beguiling television viewers with the relaxed charm of an Oz Clarke. She effortlessly glides across the spectrum, vertically and horizontally. She has the ability to write for the beginner, yet also produces the most scholastic books on wine in the wine professional’s library. She is a sprinter and long-distance runner combined. She has the most informative website for the wine lover and connoisseur, jancisrobinson.com, which is updated daily, she writes a newspaper column for The Financial Times and also writes academic works that will be in wine libraries for decades.

When asked by Who’s Who to list her recreations, she wrote simply: Wine, Food, Words. Of her youth, she writes, “I became an obsessive cook. I acquired enduring interest in food and a passion for flavors, textures and for the interplay between them.”

No wonder she found the world of wine enticing. She began as a wine journalist in the mid-1970s, roughly when I began my involvement in the drink industry, became the first Master of Wine from outside the wine trade in 1984 and has since written numerous books, thousands of articles and hosted television programs that seduced the likes of me into learning about wine and gaining more enjoyment from it.

I particularly remember her articles for The Sunday Times, the invaluable book Vines, Grapes and Wines and The Wine Program, the world’s first television program on wine. In the early 1980s I bought Masterglass, a practical wine course that was original and masterful. Despite all the relocating I have done through the years, it has survived. I still have the slim, dog-eared, now slightly musty-smelling paperback. 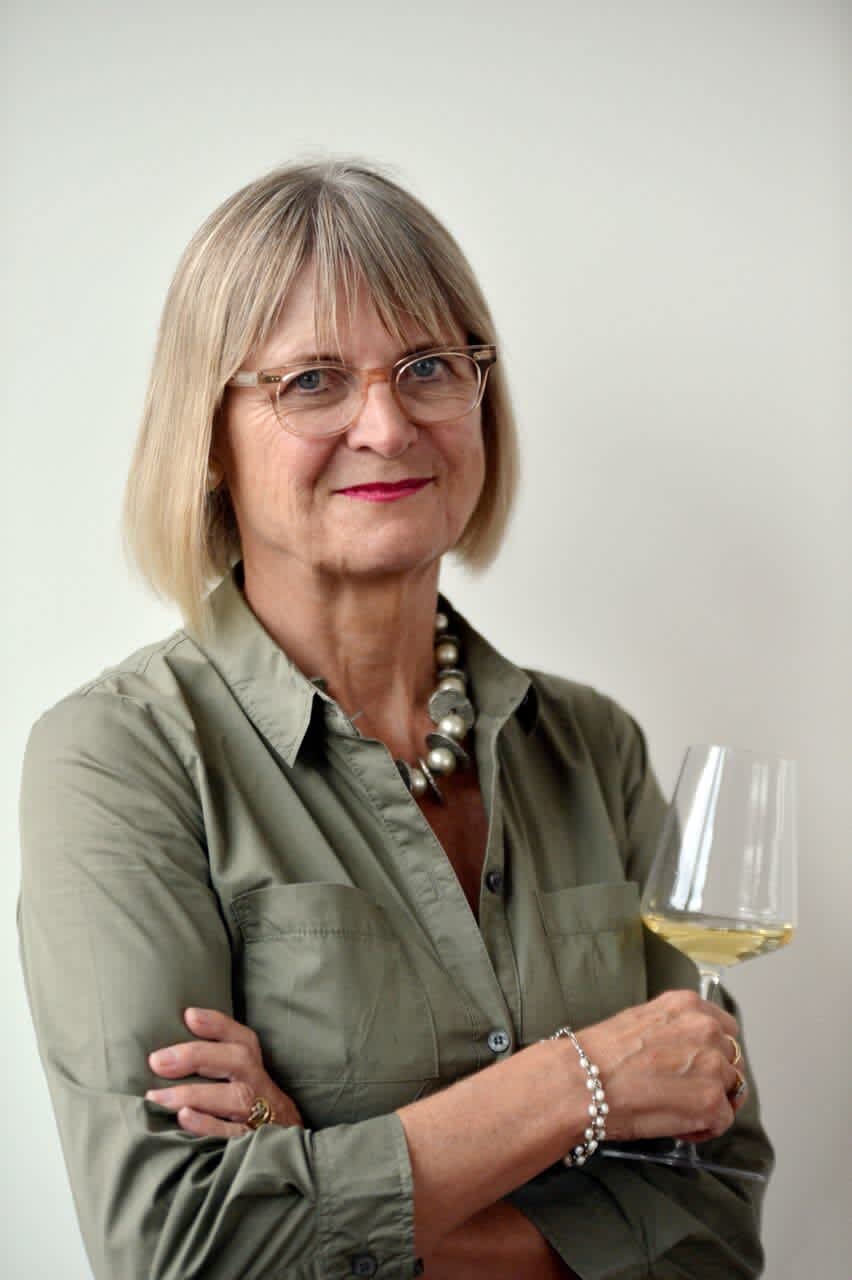 Robinson is mainly known for The Oxford Companion to Wine, the most complete reference book on wine for wine geeks and wine professionals. My son David recently passed his WSET diploma, and this was his textbook. It is a big book to stuff in a rucksack when you are traveling to India for a month! It was first published in 1994 and the fourth edition was published in 2015. Think how wine has changed and developed in the last 20 years (think of the changes in Israel alone!), and you begin to understand the massive task it is to update it each time. Then there is the ultimate book on grape varieties, which is called Wine Grapes. It covers all the different varieties, their origins and flavors, many of which I would not know even after 100 years in the wine trade. It is an indispensable guide.

The simplest book is The 24-Hour Wine Expert, an entry-level book for newbies. This Master of Wine has won every award under the sun, yet still has the ability to look the beginner in the eye, come down to their level, allay their fears and introduce them to this most complicated world. Probably the most famous wine book is The World Atlas of Wine, now in its seventh edition, which she writes with Hugh Johnson. It still makes a very popular birthday, Christmas or Hanukka present for the wine lover.

Robinson came here in great secrecy. Only a few were in the know. Her husband is Nick Lander, the famous food critic and author of The Art of the Restaurateur, one of the best books on the subject I have read. When he wrote an article about the paradox of finding so much Burgundy in Tel Aviv restaurants, there was a Facebook backlash against the sommeliers who hosted her. How dare they show her anything else other than Israeli wines!

Little did the talkback critics know that an impressive tasting had been prepared by the same sommeliers, offering what they considered the finest of Israel. In the end she tasted 55 wines from no fewer than 40 wineries, presented in a series of flights according to variety or style. The tasting was held at the Norman Hotel in Tel Aviv, whose wine list, created by talented sommelier Shira Tsiddon, won the award as Israel’s finest.

Robinson then traveled to the Judean Hills, where she was hosted by the Judean Hills Quartet, a consortium of the finest wineries in the region: Domaine du Castel, Flam Winery, Sphera and Tzora Vineyards. There she tasted a further 14 wines. While visiting tourist sites, she also managed to taste a Mony wine from Israel, made by an Israeli Arab family, and Palestinian wines from Taybeh Winery and Cremisan Monastery. No one can say she was not exposed to the full gamut of our region’s wines. 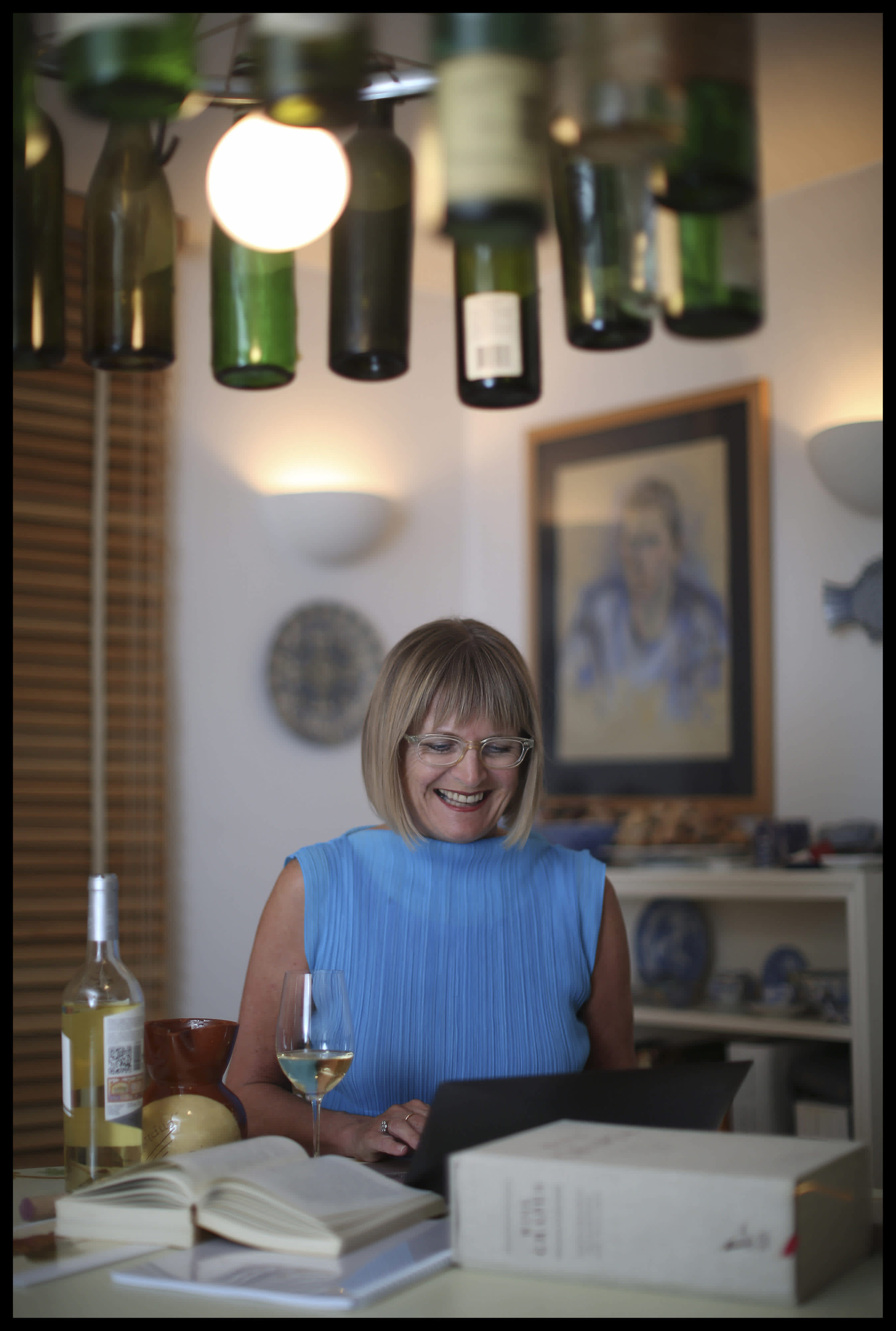 ancis Robinson at her laptop surrounding by wine bottles (courtesy)

The actual tasting process is fast and businesslike. She sits at her laptop, noses (sniffs), then tastes, briskly tapping away the thoughts we are so eager to read. I expected a demand for absolute silence, having been exposed to wine-tasting etiquette and understanding the concentration required. I was slightly embarrassed by the ongoing buzz of backchat, an Israeli disease that one can put down to enthusiasm, but she was imperturbable, pleasant and relaxed. Her focus was on the wine in the glass as opposed to the explanations, but she did manage to extract the pithy comments that were of interest, ignoring the noise.

No doubt it was a pretty comprehensive tasting. She expressed surprise about how much the Israeli wine industry has expanded in recent years and was “struck by the dramatic improvements... there is a real determination among many to produce wines that are definitely local.”

“I was most impressed by how interesting and refreshing the best white wines are,” which, she wrote, “became more interesting as we progressed to blends of the Rhone varieties.”

She was interested in the new wave of indigenous varieties like Dabouki, Marawi/ Hamdani and Jandali among the whites, and Bittouni among the reds, but then noted with her customary dry wit: “One has to remember that obscurity is not the same thing as quality.” She referred to Israel as a kind of Eastern Mediterranean California, but went on to say that the world has no shortage of warm-climate Cabernet Sauvignons and Chardonnays. She saw current world trends as being anti-oak, anti-high alcohols and pro-expressing the vineyard, rather than the wine-making.

After tasting so many wines, I was a bit wined out and said with an attempt to amuse: “Don’t you ever long for anything but wine after a long tasting?”

“Oh no,” she responded with a youthful giggle, showing the enthusiasm that has served her well and enabled her to her maintain her peerless position for so long.

In her autobiography, Confessions of a Wine Lover, she writes, “I consider myself a wine connoisseur... most days and a wine lover every night.” It seems the passion is not assuaged, but she manages to keep the rarefied life she lives in context. She writes with regret, “Many wine enthusiasts view each wine as something to be judged rather than enjoyed.” 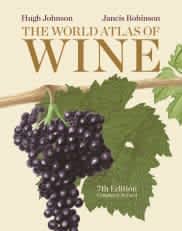 It is clear she has a special place in her heart for German Rieslings because of their quality, suitability with food and good value, but when I asked what her desert-island wine would be, she said Madeira. “It will warm you if it’s cool but its acidity will refresh if it’s hot. And there is no hurry to finish the bottle!”

Robert Parker never visited Israel and his Wine Advocate began covering Israel only in 2007. Hugh Johnson did visit, but only briefly and a long time ago in the context of his Story of Wine television series. This was Robinson’s first visit, though Julia Harding, her full time assistant, co-author of Wine Grapes and a smart, diligent and very knowledgeable Master of Wine, did come a few years ago.

However, most of the tastings published in the past were either in the context of Jewish holidays, usually Passover, or the wines were tasted at Kedem Europe’s annual tasting of all their kosher wines. Of course we need Israeli wines to be regarded as Israeli, Eastern Mediterranean wines, rather than Jewish kosher wines. The distinction is important, so the focus this year in Purple Pages (as the Jancis Robinson website is also known), is welcome and encouraging.

With all the talk of formal tastings and tasting notes, I would like to remind you what it is all about in Robinson’s own words:

“I can’t tell you what a joy it is at the end of hard day’s tasting, to be able to sit down and enjoy wine as it is designed to be enjoyed, with food and conversation... What I most want from a wine for drinking is that it is appetizing, and goes well with food…I want each mouthful to encourage the next…”

We can all drink to that!

The writer, advancing Israeli wines for more than 30 years, is known as the “English voice of Israeli wine.” www.adammontefiore.com