Women of Rojava, Kurdish Syria suffering in the shadow of war

As Turkey contemplates another offensive against the Kurds, the dream of a just society in northeast Syria drifts further away. 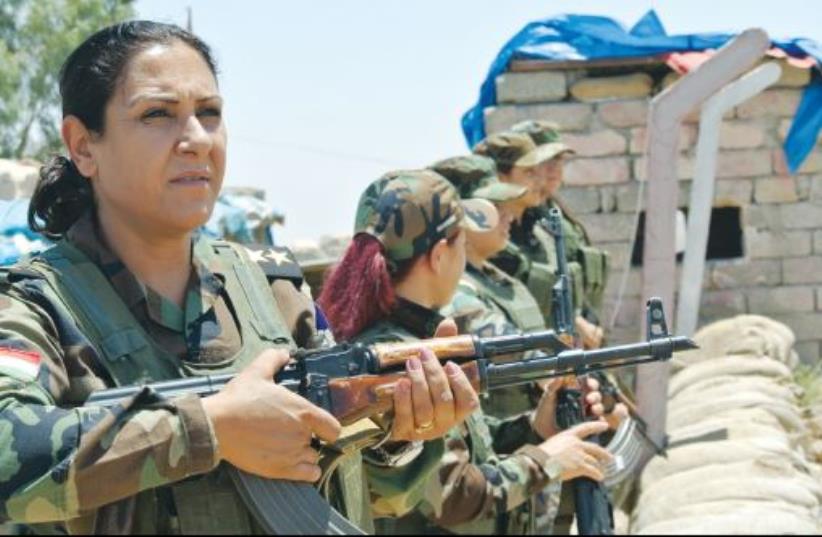 Rojava Peshmerga fighters from Syria are one of the forces guarding Mosul Dam in Iraq
(photo credit: SETH J. FRANTZMAN)
Advertisement
With the threat of yet another Turkish offensive against the Kurdish-run territories in northeastern Syria looming, the women of Rojava, who fought hard for freedom and equality, fear not only the war itself, but also its consequences for themselves and their struggle.
There are fewer women fighters today in Rojava, a de facto autonomous region in northeastern Syria, since many lost their lives fighting against the Islamic State, or ISIS. The constant threat of Turkish incursions and an unstable ceasefire, economic hardships and the attempt to squeeze the Kurds into Arab-dominated territories also have had negative effects on women’s lives, rights and liberties.

‘The threat of war is imminent'

Life in Kurdish-controlled areas in northeastern Syria was never easy. These days, basic commodities are lacking: the water and electricity supply is intermittent, jobs are in short supply, food staples are expensive and the struggle to support families and feed their children is difficult. However, as the Turkish drums of war beat ever louder, many in Rojava fear that even this difficult reality might soon be replaced with airstrikes and streams of refugees.
Turkish President Recep Tayyip Erdoğan in recent weeks has threatened to restart the Syria operation if the conditions of a deal reached between Moscow, Ankara and Washington in 2019 are not respected. Whether or not another operation in Syrian Kurdistan is around the corner, the situation on the ground is getting worse security-wise, Liza Shishko, a Russia-born journalist who lives in and covers Rojava, told The Media Line.
Turkish President Tayyip Erdogan talks to media after attending Friday prayers at Hagia Sophia Grand Mosque in Istanbul, Turkey August 7, 2020. (credit: REUTERS/MURAD SEZER/FILE PHOTO)
“Commuting in Rojava has become a bit riskier while Turkey has increased precision attacks on SDF and YPG leaders for over a month and more kidnappings are reported in Turkey-held territories,” Shishko recently reported via Telegram and Instagram.
The SDF, or Syrian Democratic Forces, an alliance of militias, is Rojava’s official defense force. The SDF is spearheaded by the YPG, or People’s Protection Units, a militia that is mainly Kurdish.
For the last two years, since Turkey launched Operation Peace Spring and attacked the primarily Kurdish towns of Tell Abyad and Ras al-Ayn in northeastern Syria, thousands of Kurdish residents were forced to flee, and significant demographic changes took place in the region.
As always, the women paid a dear price. A recent United Nations commission found vast evidence that the “situation for Kurdish women is precarious.”
The UN-mandated Independent International Commission of Inquiry on Syria found extensive evidence of daily rapes, sexual violence, harassment and torture. It cited disturbing examples of violations and targeted kidnapping of civilians in the city of Afrin, which was invaded and occupied by Turkey and Turkish-backed militias in 2018.
The report documents the rape of at least a few dozen women in Tell Abyad.
Shiler Sido, an expert on ancient Eastern languages who now explores the consequences of war for Kurdish women who became refugees within the framework of international law, says the situation is becoming worse due to an economic blockade by both the Syrian regime and Turkey. Sido was born and raised in Afrin and had to leave the city as a result of the Turkish incursion and find refuge in the Aleppo countryside.
“The situation in every part of Syria is grave – everything is destroyed, the schools, the homes, it’s an area of disaster. As for Rojava, we were blocked by the regime from the very beginning. Many agricultural lands were cut away from us, and this economic blockade still continues from all sides, and it is choking us. There are many reports that show our women suffer from lack of iron in their blood because of malnutrition,” she told The Media Line.
People stand next to a Kurdistan flag as they wait for Pope Francis to hold a mass at Franso Hariri Stadium in Erbil, Iraq, March 7, 2021. (credit: REUTERS/YARA NARDI)

The end of Kurdish utopia?

For almost 10 years, Rojava has constituted a striking foil to patriarchal and degrading attitudes toward women in Syria and across the Middle East. Kurdish, Arab and international women flocked there to join the armed struggle against oppression, but also to find refuge from conservative society and patriarchal dictate. The laws in Rojava forbid polygamy and early marriage, while the women are involved in every aspect of life, including military command and political leadership.
“ISIS wanted to cover the whole world in black and to bring us back to the Middle Ages. The whole of humanity was in danger. Not just us. Rojava was just the opposite – against radical Islamic thought, against violation of human and women’s rights,” Sido said.
“Why is Rojava so attractive for women? Well, there are not many places around the globe where women can have access to weapons and take part in armed struggle. The lack of male monopoly on arms allowed for a certain degree of confidence and ability to defend themselves. Here a woman can play a significant role in the military and civilian leadership. All of these aspects contrast with the image of the ‘weak woman’ that exists both in the West and here, in the Middle East,” she also said.
Professor Ofra Bengio of Tel Aviv University, a leading expert on Kurdish history and the author of many books, says foreigners who come to Rojava are drawn by a sense of romanticism, adventure, a war against the “bad guys” and the long civil war.
“In this aspect this phenomenon can be compared with the Spanish Civil War [1936-39] that used to draw idealists, communists and justice seekers from all over the world,” Bengio told The Media Line.
Shishko stresses that, for many Kurdish women, joining the armed resistance in Rojava is seen as an opportunity to avoid the traditional path of a female in patriarchal society – marriage, family and children. Many of them consciously choose the so-called “revolutionary celibacy.”
“Women can’t have family and children while in the YPG. There is no ban on women who had kids joining the YPG, but the family might not approve of that and even prevent her from doing that. There is always a compromise between the conservative and ultrareligious society and the needs of the revolution,” Shishko said.
Sido, a mother of three, adds that in Rojava a woman has a choice – to become a warrior, or to become a mother.
“It’s difficult to be fully dedicated to combat and war if your children and family are behind you. In a country like Syria, it’s very difficult to wage a war and to have kids. Also, under the current conditions of instability in northern Syria, the situation of a married woman is very hard as well – there are war crimes, rapes, domestic violence, and very often the women feel that they have to rebel, in this way or another,” she said.
The precarious situation in Rojava, the bloody war against ISIS and the constant threat of Turkish invasion have had a grave effect on the Kurdish utopian autonomy in northeastern Syria. Prior to 2019, women constituted about a third of all fighters in the YPG. Today, according to locals, their number is significantly less, as many have died on the battlefield or, in the case of political leader Hevrin Khalaf, were murdered by pro-Turkish forces. The SDF office did not respond to an inquiry from The Media Line.
In addition, many progressive families have left for Europe, while more conservative families move to the northern part of Rojava from the south where most women are covering their hair and stick to traditional norms. These processes result in societal changes, such as the lack of women in the public swimming pool in Qamishli and in the military ranks, notes Shishko.
The Syrian Kurds fear that, in the case of a new Turkish offensive in northeastern Syria, they will find themselves defenseless, in light of the fact that the US is distancing itself from the region, while Russia pursues its own interests vis-à-vis Ankara. Kurdish leaders in northern Syria recently issued an appeal for talks with Damascus. And last week, Damascus mobilized Syrian Arab Army units to the SDF-held town of Tel Rifaat, in anticipation of an attack by Ankara’s forces.
As Syrian Kurds continue to fight for their survival, the dream of an egalitarian and just society that was created in Rojava, where women can be fighters, leaders and judges, keeps drifting away.