‘Way to fight racism isn’t to cease discussion and debate,’ say dozens of Jewish intellectuals and writers, assert opposition to ‘the imposition of ideology’ 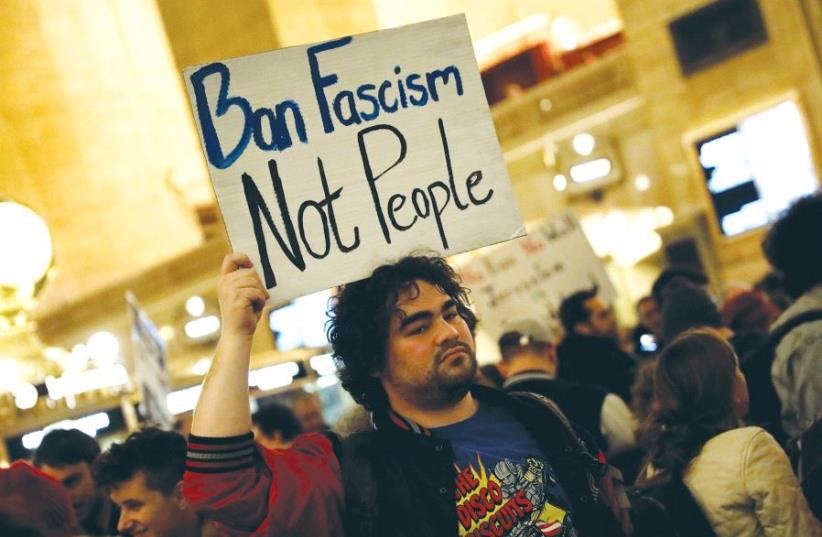 A man holds a sign during a ‘Muslim and Jewish Solidarity Protest’ against the policies of US President Donald Trump and Prime Minister Benjamin Netanyahu at Grand Central Station in Manhattan on Wednesday
(photo credit: MIKE SEGAR / REUTERS)
Advertisement
A public letter decrying what it describes as the “suppression of dissent” in the Jewish community specifically regarding social and racial justice ideas in the US has been published and signed by several dozen prominent Jewish intellectuals and writers.The letter, initiated by the newly established Jewish Institute for Liberal Values and its founder and CEO David L. Bernstein, protests in particular what it says are efforts to shut down discussion and debate on race in favor of one particular narrative, which creates difficulties for the Jewish community itself.The letter was signed by several prominent figures in the US Jewish community, including Dean of the Johns Hopkins School of Advanced International Studies Eliot Cohen; New York Times columnist Brett Stephens; Prof. Gil Troy of McGill University; columnist Bari Weiss, Conservative Rabbi David Wolpe and others.In the letter, the signatories assert that “the dominant social justice ideology” holds that “individuals bear collective moral guilt or innocence based on the current conception of group identity.”The missive argues that this narrative creates a worldview “in which groups are only oppressors or oppressed” and that such a perspective “encourages pernicious notions of ‘Jewish privilege,’ even implicating Jews in ‘white supremacy.’”The letter’s authors argue that Jewish organizations “rarely” encourage discussions that include differing perspectives, including from the Black community, and noted that “Jewish leaders have denounced other Jews for expressing unpopular opinions.“The way to fight racism isn’t to cease discussion and debate. To do so is antithetical to American ideals and antithetical to Judaism. The way to fight racism is to insist on our common humanity – and to engage in dialogue, including with those who dissent,” write the letter’s authors.“We members of the Jewish community add our voices to the growing chorus supporting our liberal principles, opposing the imposition of ideology, encouraging open discussions of challenging topics, and committing to achieving a more just America.”Speaking to The Jerusalem Post, Bernstein, said that critical social justice theory, which has become prevalent in the US, argues that oppression and bias is embedded in societal systems, and that only those who are adversely affected by this oppression can define it for the rest of society.Asked if those suffering from discrimination and bias are not best placed to define it based on their experience, Bernstein said that there is “a responsibility to listen to people affected by discrimination but this doesn’t have to be last word.”Said Bernstein: “It should be a data point, but we must retain our ability to have our own judgments, otherwise we have to believe everyone with a radical ideology. It shuts down social discourse.”