The Iran nuclear deal, formally the Joint Comprehensive Plan of Action, is an agreement between the Islamic Republic of Iran and world powers focused on Iran's nuclear program and the non-proliferation of nuclear weapons. The deal, reached July 14th, 2015 following almost two years of negotiations, was signed by Iran, the European Union and the P5+1, the five permanent members of the United Nations Security Council—China, France, Russia, the United Kingdom and the United States—plus Germany. The deal severely limits Iran's stockpile of enriched uranium and imposed limitations on the country's nuclear program in exchange for an easing of international sanctions imposed on the country. The deal was a fundamental tenet of United States President Barack Obama's foreign policy and is thus under heavy scrutiny by his successor, Donald Trump, who has threatened to remove the United States from the deal. Nuclear Agreements Under the framework of the Iran nuclear deal, the country agreed to cut its stockpile of uranium and centrifuges, which could be used to build a nuclear bomb, for a period of 15 years, after which the country can continue unconstrained in those areas. For 10 years, Iran agreed to reduce its low-enriched uranium by 98 percent, from 10,000 kilograms to 300 kilograms, and to only enrich uranium to 3.67 percent, sufficient for civilian nuclear power but not for nuclear weapons. Uranium enriched with the isotope Uranium-235 is supportive of fission chain reactions, a key component in nuclear bombs. Iran also agreed for 10 years to completely eliminate its stockpile of medium-enriched uranium, around 20%. The country capped the number of centrifuges installed at 6,104 , eliminated its advanced centrifuges and agreed not to build new enriching facilities for 15 years. It was also agreed that a heavy-water nuclear facility in Arak will be converted to a nuclear research facility with the excess material exported to the international market. Research and Development The Iran nuclear deal limited the country's research and development of enriched uranium to only the Natanz plant under heavy limitations for the first eight years, a move designed by world powers to keep Iran's "breakout time"— the time it would take Iran to build a nuclear bomb from scratch— at one year, instead of the estimated two-to-three months before the deal. Iran agreed to grant the International Atomic Energy Agency inspectors access to any site following a 24-day compliance period if the inspectors raise suspicions of secret nuclear activity. The Iran nuclear deal allows for IAEA inspectors to be present at all times monitoring Iranian researchers and allows for an eight-member joint commission- including Iran- to rule on violations of compliance by way of a simple majority. Lifting of sanctions The international community agreed to lift sanctions on Iran, contingent upon its continued commitment to the terms of the deal, and "snap back" provisions were included, wherein prior sanctions would be re-implemented should Iran be found in violation of the accord. Iran is to receive $100 billion in frozen assets from overseas banks as the United States, European Union and the United Nations agreed to cease nuclear-related sanctions on Iran. In addition, the United States agreed to halt secondary sanctions, sanctions against businesses that themselves to business with Iran, however sanctions targeting ballistic missiles or conventional weaponry remained in effect. Reaction to the Iran nuclear deal While the Iran Nuclear deal was met with widespread praise, it was criticized by both United States President Donald Trump and Israeli Prime Minister Benjamin Netanyahu. The former referred to it as "the worst deal ever" and Netanyahu said it was "a bad mistake of historic proportions."
Read More
Less 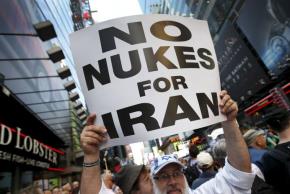 While the final itinerary was unclear, there were tentative plans for the team to visit Saudi Arabia, the United Arab Emirates, Egypt and Jordan.

Iranian leaders have repeatedly declared that Israel should be destroyed. Therefore Prime Minister Benjamin Netanyahu emphasizes that Israel will not let Iran have nuclear weapons.

Iran's move complicated the current indirect talks with the United States on rescuing its nuclear deal with major powers.

"The start of 60% enrichment in Natanz was a demonstration of our technical ability," Iranian government spokesman Ali Rabiei said.

It is essential that disputes with Iran be solved diplomatically and not militarily.

On Thursday, the IAEA said that Tehran was already deep into preparations to make its threats a reality.

"We will have to see how in the coming days we address these violations with the will to press ahead in the talks."

This “reserves the right” story about retaliation appears to be a dialing back of Iran’s claims it would retaliate.

"The Zionists want to take revenge because of our progress in the way to lift sanctions... We will not fall into their trap...We will not allow this act of sabotage to affect the nuclear talks."